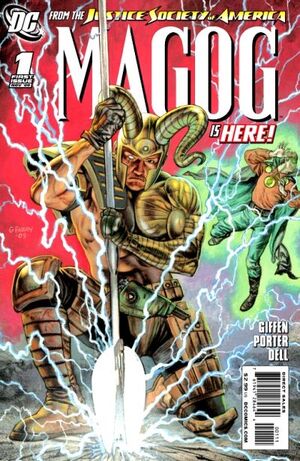 Guess Gog was right about one thing... destiny calls.

Magog is in Sudan where he find a vacant village and the grisly scene of a cart carrying dismembered arms. This is the second incident he had seen so far. He then tracks down where the perpetrators had gone and found soldiers leading a caravan of armless villagers, who are each implanted with a small device to their heads. Magog proceed to kill the soldiers and apprehending a device from one of the villagers, which he identifies as "Wonder Tech".

David Reid recuperate at his hotel in Omdurman where he contacts with his friend Axel Baines, who has foremost knowledge in Wonder Tech and describes it as Meta-associated items which were salvaged and illegally sold by criminal enterprises. As told by David, the devices were controlling the villagers who were already dead in which Axel hasn't find anything on any technology on his database that could raise the dead and has his doubts that Intergang is involved. After bidding goodbye to Axel, David is visited by Alan Scott, the Green Lantern, who is concerned and not on a good foot of David's recent actions. David explains him on the Wonder Tech before Green Lantern left with spite over David's killings.

David returns to Ordell, West Virginia where he reunite with Axel Baines, who appears as a gas station attendant but is actually a gifted intellectual and David's closest friend and intelligence analyst. David also befriended local waitress Lauren Weaver, who suffers a physical abusive relationship with her husband and receiving secret combat training from David to defend against her husband.

Meanwhile in Los Angeles, a weapons deal over advanced weapons is conducted in a gang member's home; however, the dealer reveals to his client that he is not the client, which he and the gang, including his family are killed by men in advanced stealth-suits. The dealer was working for his actual client to eliminate the gang as a demonstration to make it appear as a broad daylight takedown.

Back in Ordell, David and Axel hasn't make any leads regarding to the Wonder Tech. David then gives Axel the device he had pried from the villager to examine it.

Retrieved from "https://heykidscomics.fandom.com/wiki/Magog_Vol_1_1?oldid=1455334"
Community content is available under CC-BY-SA unless otherwise noted.