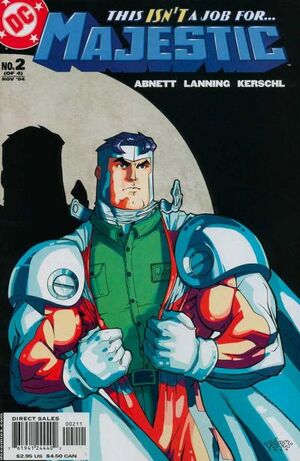 Far in the past, in Khera, Majestros does battle with the Daemonites. Successful, he goes home with his comrades to the palace, where he sits down to see a banquet in progress. Entering, he sees a young beautiful girl who catches his eye.

Majestic awakens at present, in the house where he has adopted his secret identity. The young boy, Elijah, awakens him (as Jim McArest) for his days work, noting a suitcase under Majestic's bed. Ellen, Elijah's mother, questions McArest about a few things, most especially the slip Jim has, calling her Elan instead of Ellen, which he passes off as an accent.

At the school, McArest is the groundskeeper, and he mows the lawn. Elijah explains to his friends that he thinks McArest is really Superman. McArest bends a bent lawn blade back right in front of them, fueling suspicion. Majestic, looking at the blade, remembers doing battle at court on Khera, becoming distracted seeing the young girl, Elan again, and getting injured.

In the diner in Metropolis from last issue, the waitress tells of Majestic's visit. She heads out back to take care of some trash, and is sucked up by a strange Daemonite force.

Ellen asks Jim to take care of Elijah, later that day. He agrees, taking him out to play baseball. Jim hears the coach berating a kid rather harshly, but lets it go. He remembers doing dishes as punishment for failing to win the battle, and Elan comes to see him, helping.

In space, the Eradicator has taken form again, and begins descending to Earth, forming himself again. He is overwhelmed by a huge intake of data and seeks out Majestic as the cause.

After the baseball game, Jim hears the coach again, being overly cruel. He goes to talk to the man, telling him to be nicer. Jim turns to leave, and the coach brings a bat down on his back. The bat snaps, Jim burns it with his heat vision, and tells the man he he just resigned as coach.

At the house, Elijah thanks him for taking him to baseball. He then goes upstairs, opens Jim's suitcase, and pulls out the Majestic suit, calling for his mother.

Retrieved from "https://heykidscomics.fandom.com/wiki/Majestic_Vol_1_2?oldid=1443474"
Community content is available under CC-BY-SA unless otherwise noted.