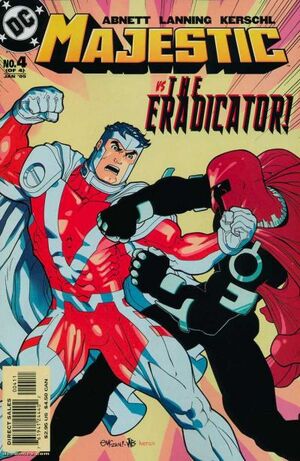 Mr. Majestic, doing battle with the Daemonite, realizes that it is a leftover scout from the war, and that it must have come through The Bleed, the same as Majestic did. He tosses the Daemonite, which lands in Ellen's house. Inside, Ellen screams.

Majestic remembers a similar situation. As a young man, Daemonites attack as he and Elan walk. He attacks without mercy, slashing a Daemonite who takes the form of Elan. Elan sees it, and their relationship ends. She realizes that his cause is that of war.

Eradicator explains that when Majestic rewrote his biology, it attuned him to everything, and that he knows the creature and its nature. Further, he knows that the creature has been totally corrupted by The Bleed.

They punch the Daemonite at the same time, and press the attack. Eradicator explains that the creature is rupturing space-time, and will destroy a five square mile area if they do not stop it.

Meanwhile, Eli is stuck beneath a beam, his leg hurt.

The monster slams Majestic, who watches in horror as behind the creature, a hole is ripped in the fabric of space-time. Majestic realizes that at home, because he is trapped on Superman's Earth, the Daemonites could be running wild, and he could go through and cut them off at the pass. But then, five miles of humans would die. But then, millions of his own people could die.

Majestic ponders. He remembers how Elan reacted, how she left him because he was callous, even if he was right, how sometimes, a life here or a life there, you have to make choices with your heart. He looks at Ellen, again sees the parallel, and starts attacking the Daemonite with a renewed vigor, throwing it into the rip.

Eradicator is nearly pulled in, separated into multiple selves, but they manage to hold. The threat disappears. Eradicator thanks Majestic, telling him he knows the sacrifice he made.

The next day, they rebuild Ellen's house, and Superman and Eradicator show up to help and thank them. Majestic asks what brought them here.

Retrieved from "https://heykidscomics.fandom.com/wiki/Majestic_Vol_1_4?oldid=1443476"
Community content is available under CC-BY-SA unless otherwise noted.