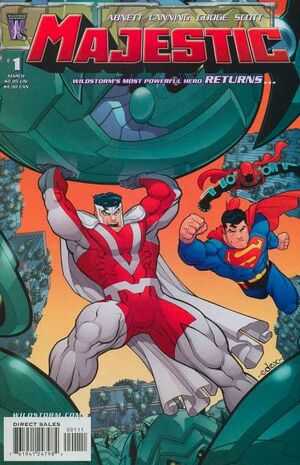 Appearing in "While You Were Out"Edit

Synopsis for "While You Were Out"Edit

Majestic, Superman, and the Eradicator arrive back in Majestic’s home dimension to find Earth completely deserted. A search of EarthNew York City results in the three being attacked by a group of unknown mechanical constructs. After making short work of their attackers, the powerful trio retreats to Majestic’s Rushmore sanctuary to keep from damaging New York any further as a result of the battle.

Once at Rushmore, Majestic uses his computer to access the possible reasons for the disappearance of all life on Earth, when Eradicator reveals that he and Superman only have a very short window to make it back through The Bleed and to their universe. Saying their goodbyes, Majestic and Eradicator head back home.

Just as his two companions leave, Majestic finds himself confronted with a massive army of unknown alien robots (Vedettes).

Retrieved from "https://heykidscomics.fandom.com/wiki/Majestic_Vol_2_1?oldid=1443477"
Community content is available under CC-BY-SA unless otherwise noted.