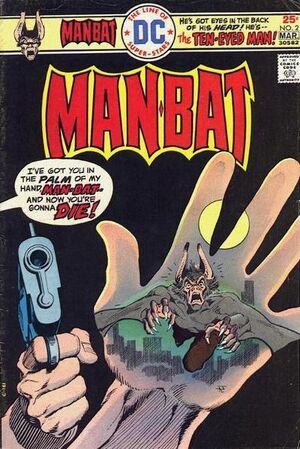 Come on, you ugly cuss -- fight! You're making it all too easy!

Appearing in "Fugitive from Blind Justice"Edit

Synopsis for "Fugitive from Blind Justice"Edit

The Man-Bat relocates to his old home town of Chicago, Illinois. While flying across the city, a costumed criminal known as the Ten-Eyed Man attacks him. The Ten-Eyed Man attempts to ensnare Man-Bat with a net, but he just claws his way through it. Unaware of whom this man is or what he's capable of, the Man-Bat dives into Lake Michigan and transforms back into Kirk Langstrom. He comes up on the shore and hails a taxicab.

He returns to his home at the Lakeshore Manor Apartments only to find a room full of family and friends shouting "Surprise!" Kirk doesn't know what to say, and he certainly was not expecting a Welcome Home party. He pushes past the guests into the bedroom where he finds his wife, Francine, suffering from one of her episodes. Kirk is afraid that she might turn back into the She-Bat, so he ties her down to the bed.

In the middle of the party, Kirk goes out onto his balcony where he finds the Ten-Eyed Man waiting for him. Kirk changes into Man-Bat and the two begin fighting. As they battle one another, Man-Bat discovers that his foe has optic nerves in his fingertips, allowing him to see anything within a 360 degree radius. Man-Bat throws a potted plant at the Ten-Eyed Man who reflexively catches it, thus blinding himself momentarily. Man-Bat takes advantage of the opportunity and flies off to catch his breath. While resting, he suddenly recalls reading about his foe once before. The Ten-Eyed Man is actually Phillip Reardon, a man who had optic nerves grafted onto his fingertips by an organization known as the Civil Liberties Association. What Man-Bat doesn't know however is that the CLA has hired Reardon to capture the Man-Bat, with the promise of duplicating and giving Reardon Man-Bat's echolocation abilities.

The Man-Bat flies back up to the roof of his complex, but when he gets there, he finds Reardon arming a magnesium flare bomb. Man-Bat forces Reardon's hands onto the bomb just as it emits its brilliant light, blinding the Ten-Eyed Man once again. Disoriented, Reardon steps backward and falls from the roof of the building, seemingly to his death.

Retrieved from "https://heykidscomics.fandom.com/wiki/Man-Bat_Vol_1_2?oldid=1514529"
Community content is available under CC-BY-SA unless otherwise noted.