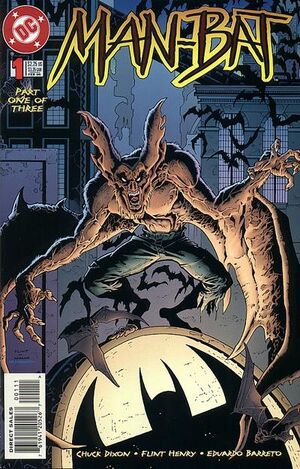 After an undisclosed period of time living in the wilderness away from humans and months of night-flying, Man-Bat has returned to Gotham City driven to satiate a longing for a mental image he knows only as Francine. While searching for her scent and/or sound to home in on her, he is spotted by a WGTM newscopter, shot at by a man raising birds on his rooftop, and unintentionally interferes with a Gotham Tactical Response Unit's handling of a hostage situation. While this is going on, Becky Langstrom has a nightmare involving a "flying man" and is comforted by her mother, Francine. The nightmares appear to be recurring. That night Jennings Welles is mutilated in his sixty-first floor apartment by someone who apparently busted a hole (and entered through) the apartment wall. Because of the new "flying man" theory, the case is transferred to the Major Crimes Unit and Detective Bullock.

The next night the news is focused on this flying man. Becky and Francince are watching and Francine tries to convince Becky that the flying man isn't real. That same night Damon Carruthers, after being brutalized, is flown above Gotham and dropped onto a skyscraper's spire. Bullock and Montoya investigate. They go back to headquarters and talk with Commissioner Sarah Gordon who reveals that a third person was killed in Central City earlier. All three were geneticists. William Pettit arrives to discuss his witnessing of Man-Bat and suggests leading a "Hunting Party" to find and kill the flying man. All the police leave Gordon's office and she confronts Batman who had been hiding and listening. He expresses concern over Pettit's ideas and decides to investigate.

Francine is working late in her office and colleague David Felcher brings her some coffee. After he leaves, Francine remembers her hospital stay after having given birth to her son (Kirk was already gone at this point). The doctors refuse to allow her to see the baby boy saying he has a rare form of cancer and only a few months to live. They ask her if she has been exposed to mutagens or genetically-altering chemicals.

Pettit and Kitch decide to hunt the "flying man" without Gordon's permission and camp out on the roof of Wayne Tower.

Man-Bat finally finds Francine at home and the repulsion in her faces drives him off...and into the site of Pettit's gun.

Retrieved from "https://heykidscomics.fandom.com/wiki/Man-Bat_Vol_2_1?oldid=1443500"
Community content is available under CC-BY-SA unless otherwise noted.