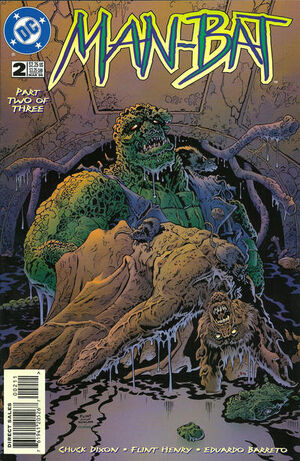 Appearing in "Dark of the Moon"Edit

Synopsis for "Dark of the Moon"Edit

Pettit manages to shoot Man-Bat a couple times and Man-Bat flies away to seek refuge. He flies inside a train tunnel where he is found by Killer Croc who carries him to his home and patches him up.

Batman and Commissioner Gordon confer. Gordon thinks Man-Bat's return to Gotham fits with their "flying man" killer theory but Batman disagrees pointing out that all the murder victims had metal particles in the wounds. Batman thinks the killer is technology based and that Man-Bat is not a killer.

Edwin Clower calls his wife from the Gotham Plaza Hotel. He states that an unknown benefactor has purchsed his first-class airline ticket and bought him this suite and that he'll learn the benefactor's identity tonight. Edwin thinks it's a university trying to entice him to working for them but an armored, flying killer bursts through the window and brutally slays Edwin.

Pettit and Kitch, after having shot Man-Bat, attempt to follow his blood trail so they can finish him off but the rain washes it away.

Officers Bullock, Montoya and the crime scene scientists investigate Edwin's room looking for clues. They go to Francine's workplace and tell her about the recent deaths of the scientists and believe she and Kirk may be targets due to their relationship with the Helix Commission. Francine gives them minimal information and the officers leave. Meanwhile Pettit and Kitch are watching her from afar also believing her to be a target for the flying man killer.

Francine returns home (secretly followed by Pettit and Kitch) and calls Miles Temple leaving a message of concern on his answering machine unaware that the killer is already there and murdering Miles. Becky awakens after having a dream that someone was watching her.

Man-Bat, having healed somewhat, decides he must see Francine again and flies off to find her.

Retrieved from "https://heykidscomics.fandom.com/wiki/Man-Bat_Vol_2_2?oldid=1443501"
Community content is available under CC-BY-SA unless otherwise noted.