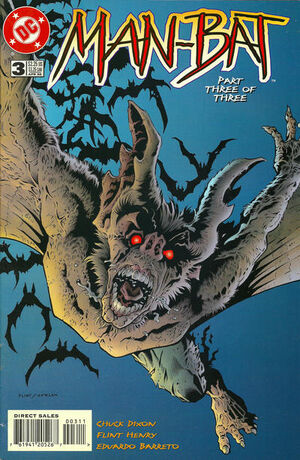 Appearing in "The Deadly Sky"Edit

Synopsis for "The Deadly Sky"Edit

Man-Bat hides outside Francine's residence watching her read to Becky and put her to bed. Pettit and Kitch also watch from a distant roof-top hoping to get another shot at Man-Bat.

David Felcher arrives and he and Francine talk. Francine tells him she thinks Kirk is the flying killer and tells him about the Helix Commission and how she and Kirk were invited to join them. During a conference held in Gotham City, they informed the Langstroms of their plan to create a genetic human without any sentience or conciousness which would allow them to experiment without any ethical objections. However, the Langstoms find this plan horrid and leave the group. Francine thinks Kirk is picking them off one by one.

Just then the real flying killer breaks through the window looking for Kirk Langstrom. He grabs Francine and flies out the window. Man-Bat attacks the killer while Pettit tries to aim his gun at them but Kitch stops him in case he hits Francine instead. The two policemen head to their car to follow. The killer batters Man-Bat enough that he falls away and the killer takes Francine to its base of operations. The killer reveals that he was the product of the Helix Commission's experiments and was designed to be a weapon. He blames them all for creating him. Francince tries to assure him that neither she nor Kirk helped in the experiments but the creature knows that their research was used regardless of whether they offered it voluntarily. Man-Bat finds them and attacks the creature. They struggle in flight over the city until Man-Bat causes the creature to fly head-first into the girders of a in-construction building. Man-Bat flies back to Francince who tries to accept him warmly but Man-Bat fearfully flies off. Pettit and Kitch find the dead body of the real killer.

Later, Francine goes to the Bristol Children's Hopital and meets with Doctor Windom who discusses her son, Aaron. It is implied that Francine injected Aaron with the bat-formula in order to allow him to fight off the cancer and that Doctor Windom has been hiding Aaron from the public ever since as a favor to the Langstroms. Doctor Windom asks for a biological sample from Kirk but Francine admits he's unable to help. He also doesn't know he has a son. They go to see Aaron.

Retrieved from "https://heykidscomics.fandom.com/wiki/Man-Bat_Vol_2_3?oldid=1443502"
Community content is available under CC-BY-SA unless otherwise noted.