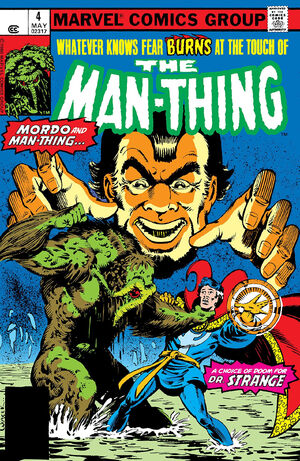 Continued from last issue... As the Man-Thing and Elaine grab hold of an airplane over the Himalayan mountains, the cold weather finally takes it's toll on the muck monster when his hand snaps off and the two plummet seemingly to their deaths.

While in Paris, Dr. Strange finishes his battle with Azrael, formerly his colleague Lord Julian Phyffe, who has sided with Baron Mordo in opening the Chaos Gates. Although Azrael manages to age Dr. Strange to the vitality of an old man, the Sorcerer Supreme manages to defeat Azrael who is banished from Earth.

Revitalizing himself, Strange leaves with his colleague Madeleine De St. Germaine, and their travels take them to Citrusville, Florida. There Dr. Strange investigates a series of disappearances, and believes they have to do with the sacrifices Baron Mordo would have to complete to open the Chaos gates.

They meet with Sheriff Daltry, who sends them off with the young boy Jaxon to meet with Jennifer Kale, whom Strange knows is a mystic in the area. When arriving near the Kale home, they are warned to get away by Elaine, when suddenly they are attacked by the Man-Thing. Mordo watches on as the Man-Thing and Dr. Strange fight. Strange is perplexed that the muck-monster appears to be fighting with some form of intelligence, and his magical attacks have limited effect on the muck monster due to the nature of it's powers. The creature gets the upper hand and pins Strange under water where he seemingly drowns.

Retrieved from "https://heykidscomics.fandom.com/wiki/Man-Thing_Vol_2_4?oldid=1441328"
Community content is available under CC-BY-SA unless otherwise noted.