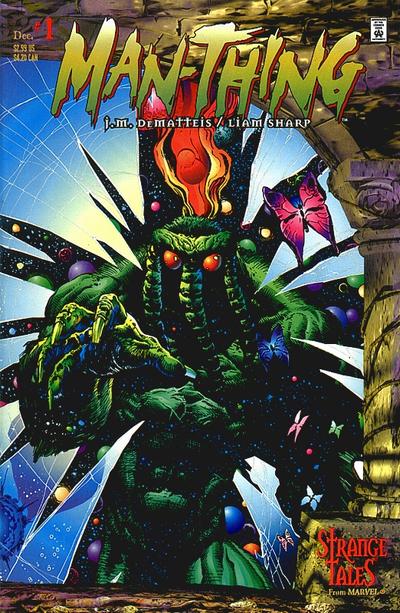 Jack and Gwyneth Burke are driving down a road in Citrusville when the Man-Thing lumbers out into the street. Their car strikes the creature, but the Man-Thing's body quickly reconstitutes itself.

Meanwhile, Ellen Brandt suffers a nightmare wherein she sees herself being attacked by the Man-Thing. As the former fiancée of scientist Ted Sallis, Ellen was instrumental in the accident that transformed Sallis into the Man-Thing. Awakening with a start, she stares into a mirror examining her ruined face - scars she acquired after suffering from the Man-Thing's burning touch.

From his Sanctum Sanctorum, Doctor Strange analyzes the intricacies of the various realities and determines that the End of All Things is fastly approaching. This premonition is somehow tied to the unconscious echo of the Man-Thing's psyche. Strange decides to investigate the matter deeper.

Later, the Man-Thing comes upon pedophile Owen Jackson. The Man-Thing's empathic powers bring to light Jackson's guilt over his sinful past. Unwilling to live with such emotional pain any longer, he lets the Man-Thing destroy him with his touch. A sheriff and his deputy come upon the scene, and the sheriff fires his pistol at the Man-Thing. The damage is superficial however, and the Man-Thing quickly recovers from it.

Ellen Brandt goes to a diner to get some food and drown out her sorrows. A trucker named Henry Welles begins hitting on her, but Ellen brushes him off. The man is insistent however and pulls Ellen out of her seat. When he sees her scarred face, he grows repulsed and Ellen slashes him across the stomach with a steak knife. When he lunges to attack her, the Man-Thing crashes through the diner window, grabs Welles by the throat and kills him. Ellen stands before the creature and is certain that some part of Ted Sallis still lingers inside of him. The sheriff and his deputy catch up to the Man-Thing, but Ellen stands in front of him, ready to protect him. The officers open fire but are stunned when their bullets suddenly turn into butterflies. All eyes turn to see Doctor Strange hovering before them.

Retrieved from "https://heykidscomics.fandom.com/wiki/Man-Thing_Vol_3_1?oldid=1496584"
Community content is available under CC-BY-SA unless otherwise noted.