Start a Wiki
Part of the 'One Year Later' event 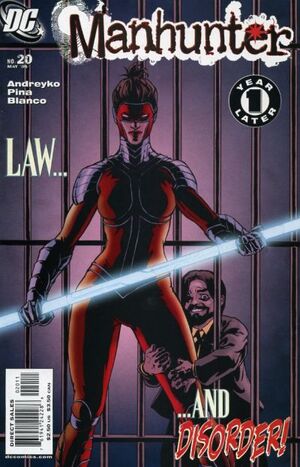 Punch and Jewelee are stealing paintings when they are interrupted by Manhunter, who takes them down with the help of a newly re-powered Obsidian. Obsidian is in town to visit his alter-ego's boyfriend, Damon Matthews, for his birthday, but he agrees to deliver Punch and Jewelee to the cops so Manhunter can get home in time to meet her son, Ramsey Spencer. Life has gone on in Los Angeles in the past year. Cameron Chase is sleeping with Dylan Battles, though she denies that it is any kind of relationship, and Kate's ex Peter Robinson is not only involved in a new movie, but is married to his new and very pregnant wife, Julie Robinson. Meanwhile a killer stalks the streets of Los Angeles, murdering a woman with a fold-out razor that glows with fiery energy.

Kate Spencer is distracted with two problems of her own. The first is that her son, Ramsey, is convinced his mother is the superhero Manhunter, despite her efforts to deny it. The second is that Director Bones has asked her to be the defense attorney for the incarcerated Doctor Psycho.

Retrieved from "https://heykidscomics.fandom.com/wiki/Manhunter_Vol_3_20?oldid=1443563"
Community content is available under CC-BY-SA unless otherwise noted.