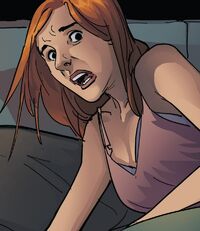 When Deadpool sought Stryfe's help to save the life of his daughter Ellie, the villain demanded in exchange that Deadpool had to murder four people Stryfe ordered him to kill with no exceptions.[1] The final victim was a seemingly normal citizen named Marietta Nelson who lived in Bleecker Street.

Deadpool snuck into her bedroom in the middle of the night and woke her up to tell her that he was going to kill her, and why. After learning that Ellie's life was at stake, Marietta considered that it wasn't the worst end to die so that a young girl could live. Deadpool approached her, and Marietta asked him if it was going to hurt. He told her that it wouldn't, since he had injected her with some kind of poison without her noticing, which killed her in the moment.[2]