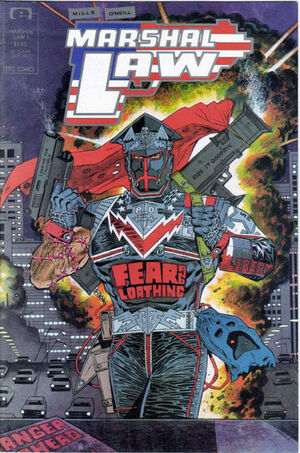 I am bacteria. I am the lowest form of life. I am a super hero. My flagella are my hands. I see the world through my vacuole. I wear a bag over my head because I'm ashamed of what I am. And what I'm doing.

Appearing in "Stars and Strippers"Edit

Synopsis for "Stars and Strippers"Edit

The war is over. San Francisco lies in ruins. And the government-created super hero soldiers are coming home. But only Marshal Law can stop them from destroying their homeland as well!

Retrieved from "https://heykidscomics.fandom.com/wiki/Marshal_Law_Vol_1_1?oldid=736859"
Community content is available under CC-BY-SA unless otherwise noted.