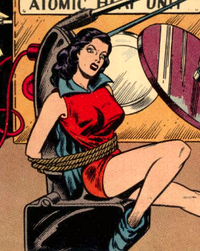 Martha Roberts was the daughter of Professor Roberts, who tutored his young protege' Darrel Dane in his home laboratory. During the summer of 1939, Martha was being blackmailed by a criminal named Falco over love letters she had written one of her former college teachers. After imbibing a concoction, Dane found himself shrunk to the height of six inches, but with his normal strength intact. Martha sewed him new clothes to wear, and he began to worry that he might never be able to regain his normal height.

After refusing to pay Falco any more blackmail money, Martha was kidnapped by Falco and rescued by the "doll man". Finding through intense concentration, Dane could affect his height, he decided to begin to fight crime as Doll Man, often assisted by Martha (who also became his scientific research assistant). [1]

In 1944, while wishing and concentrating about being able to shrink down to aid Doll Man, Darrel also was thinking about the same thing and suddenly, Martha's height and weight dwindled down until she was on the same scale as Doll Man. She briefly teamed with Doll Man as Midge. [2] In 1951, Martha adopted a longer-lasting super-identity as Doll Girl.[3]

Retrieved from "https://heykidscomics.fandom.com/wiki/Martha_Roberts_(New_Earth)?oldid=1624437"
Community content is available under CC-BY-SA unless otherwise noted.