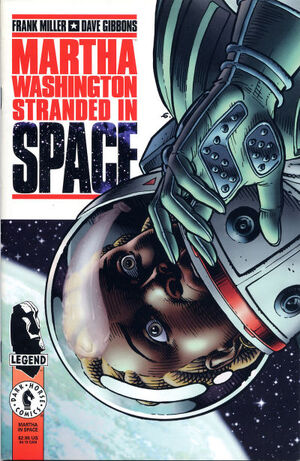 All her life she has fought for freedom, tried to make her imperfect world into something perfect. Now, on the far edge of space, Martha Washington has found the road to her utopia. There's a perfect world in another galaxy, and all the signposts are pointing her in the right direction. Martha's no stranger to war, but now the battle is being fought in her head -- and in her heart. Can she leave behind her cause for the brass ring she's always reached for? In the toughest battles, being a warrior isn't always enough.

"Crossover" is an all-new, full-color 18-page story by Frank Miller and Dave Gibbons, featuring a guest appearance by The Big Guy. Martha Washington in Space also features the six-page story "Martha Washington and the Attack of the Flesh-Eating Monsters" (originally printed in black and white in Dark Horse Presents 100 #4), presented here for the first time in color.

Retrieved from "https://heykidscomics.fandom.com/wiki/Martha_Washington_Stranded_in_Space_Vol_1_1?oldid=1471838"
Community content is available under CC-BY-SA unless otherwise noted.