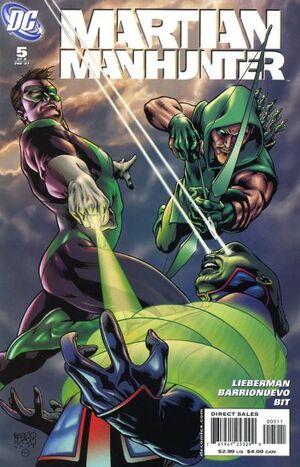 Martians only have one word for cursed. It's all we've ever needed.

Appearing in "The Others Among Us (Part V of VIII)"Edit

Synopsis for "The Others Among Us (Part V of VIII)"Edit

A DEO helicopter continues to track the Martians. A streak of energy fires through the sky sending the chopper down into the East River.

In rural Pennsylvania, the Martian Manhunter brings his fellow refugees, along with Sara Moore, to an abandoned housing development. Leaving them there, he goes off to reclaim Sy'rann's body. It is his intent to purify the remains in accordance with Martian tradition.

In Washington, Rio Ferdinand reports to Mister Keane at the office of Homeland Security. She tells him that Giggs' helicopter went down, and that he is likely dead. Keane suspects that Giggs may have gone AWOL.

The Martian Manhunter searches for Sy'rann, but ultimately comes upon the absent Agent Giggs. He brings him back to the safehouse where he interrogates him at length. Giggs yields information relating to Sy'rann.

J'onn flies to a warehouse at Sullivan Imports where he finds the Martian's remains. From within the shadows, someone fires an incendiary shell, which erupts into flame right before the Manhunter's eyes. Fortunately, Till'all followed J'onn to the site, whereupon he pulls him out of harm's way. They return to the safe house.

J'onn theorizes that someone with intimate knowledge of Martian physiology has been experimenting on other Martians in an effort to duplicate H'ronmeer's Plague – the psychic fire that led to the extinction of the Martian race. The other Martians suspect that Sara Moore may be involved, but J'onn vouches for her.

Later, a group of J'onn's oldest allies including Black Canary, Green Arrow, Green Lantern, Vixen and Zatanna have joined together to bring J'onn in. They do not understand why he has been attacking various government facilities for the past several days. Alone, even the Martian Manhunter has little chance of defeating his former allies, but his Martian colleagues come to his aid and the battle is brief.

Meanwhile, Giggs escapes from his confinement and runs out into the woods. He meets with another Martian who has been conspiring against J'onn J'onzz.

Retrieved from "https://heykidscomics.fandom.com/wiki/Martian_Manhunter_Vol_3_5?oldid=1534235"
Community content is available under CC-BY-SA unless otherwise noted.