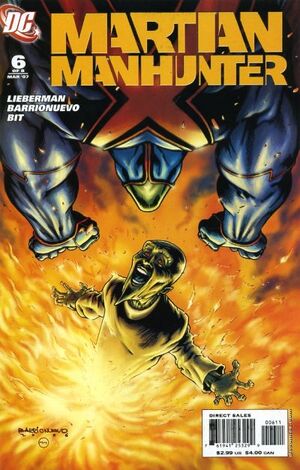 I am going to ask you this question one time. You can tell me, or I can tear it from your mind. One hurts, one doesn't. It matters little to me which option you choose.

Appearing in "The Others Among Us (Part VI of VIII)"Edit

Synopsis for "The Others Among Us (Part VI of VIII)"Edit

At the Middleton Woods Estates in Pennsylvania, J'onn J'onzz, the Martian Manhunter accuses his fellow Martians of killing two DEO agents. One of them, Dal'en, begins to suffer an emotional breakdown and it becomes clear that he is responsible for their deaths. Dal'en has a seizure and collapses.

Meanwhile, FBI agents raid the safe house of Rio Ferdinand and arrest her. They interrogate her as to the shooting incident at the S.T.A.R. Labs facility in the Sonorian Desert in Arizona. They have little evidence to validate containing her and are forced to let her go.

J'onn flies to Gotham City. He suspects that whoever is behind this must have learned about Martian Culture from an alternate source. He suspects that his old JLA colleague, Scorch, might be involved. He asks Batman where Scorch has been transferred to, but Batman refuses to cooperate unless he is satisfied that J'onn has not gone rogue as others have suggested.

After the Feds release her, Rio Ferdinand goes to her boss, Mister Keane. She thinks that Keane betrayed her and plans on killing him, but Keane tells her that it was Giggs who has gone rogue and has planted false evidence in order to frame Ferdinand. Rio reluctantly lets him live.

J'onn returns to the other Martians and decides that they must all have their blood analyzed to determine if their adversaries' weaponry is a deliberate attempt to replicate the H'ronmeer's Plague virus. Sara Moore attends them and they go to Spectrum Tech Corp. in Milbourne, Pennsylvania. While there, Alfred Pennyworth arrives and gives the Martian Manhunter a name. He knows that Bruce would want to help out, but can't.

J'onn uses Alfred's information and tracks down Section Chief Keane. He tears him out of his helicopter and begins an invasive telepathic probe. Superman arrives and talks J'onn out of causing the man irreversible cerebral damage.

Back at Spectrum Tech, Sara Moore analyzes the Martian blood samples and realizes that something is wrong. There are no traces of a virus, but their DNA is radically different from that of the Martian Manhunter's.

Suddenly, Dal'en has another breakdown and goes berserk. J'onn arrives and tries to contain him, but Dal'en's body begins rebelling against itself. He shape-shifts into his true form – a White Martian!

Retrieved from "https://heykidscomics.fandom.com/wiki/Martian_Manhunter_Vol_3_6?oldid=1534667"
Community content is available under CC-BY-SA unless otherwise noted.