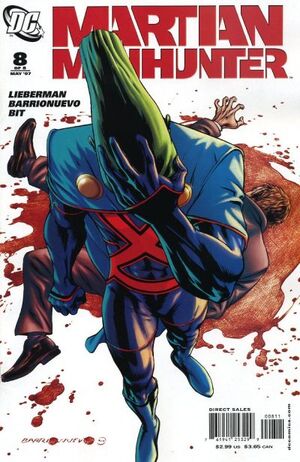 For as long as I can remember, my only wish was to find another like me. I told myself just one would be enough. Just one would give me hope that our race could survive. And now, to come face to face with the very thing I hoped for only to find you.

Appearing in "The Others Among Us (Part VIII of VIII)"Edit

Synopsis for "The Others Among Us (Part VIII of VIII)"Edit

In the ruins of Section Chief Keane's mansion, J'onn J'onzz, the Martian Manhunter interrogates him at length. Keane is not a Martian as J'onn suspected, but admits that he spearheaded the research program in order to weaponize Martian abilities. He wanted to be able to build a defense against potential Martian invaders. Rio Ferdinand arrives on the scene and decides to avenge herself against Keane for trying to kill her. Rather than taking his life however, she hands J'onn a file box containing incriminating evidence linking Keane to the Martian research laboratory. Keane withdraws a revolver and tries to take his own life, but the Manhunter snatches it from his hand with super-speed. He is not ready to let Keane take the coward's way out.

J'onn later meets with Superman. He tells him that he suspects that this entire affair is bigger than just Keane. He believes a Green Martian is at the epicenter of all of this; one who has been on Earth for years, "planning, infiltrating, manipulating – all in preparation of this very moment", as J'onn puts it.

J'onn meets back up with Sara Moore before resuming his hunt for the missing Till'all. He soon finds him outside their first safe house in New York. In addition to the primal instincts of his White Martian heritage, Till'all is enraged to learn that Mica'kel has been killed. He tells J’onn that Mica'kel was his father. The two fight one another, but J'onn convinces Till'all that it was another Martian who was responsible for their captivity and subsequent brainwashing. Till'all allows J'onn to telepathically scan his memories in the hopes of gleaning some insight into the manipulator's true identity.

J'onn learns that the alien mastermind behind this plot is actually Sara Moore; a Green Martian whose true name is Cay'an. The two confront one another on the roof of the New York tower, and Cay'an reveals her true Green Martian form. She tells him that this entire affair was done to turn public opinion against the Martian Manhunter. She blames the Manhunter for the destruction of their home world even though the true architect of that catastrophe was J'onn's brother, Ma'alefa'ak. J'onn and Cay'an fight one another, but they are two evenly matched. Ultimately, Cay'an is forced to flee. J'onn is unable to track her, but her plans are ruined now that she has been exposed.

Later, J'onn learns that Section Chief Keane's involvement in this scandal has been made public. His image is plastered across the front page of the Daily Planet newspaper.

J'onn brings Till'all to JLA headquarters with the promise that he will be safe and that he is among friends. Till'all is grateful for his help.

Retrieved from "https://heykidscomics.fandom.com/wiki/Martian_Manhunter_Vol_3_8?oldid=1500621"
Community content is available under CC-BY-SA unless otherwise noted.