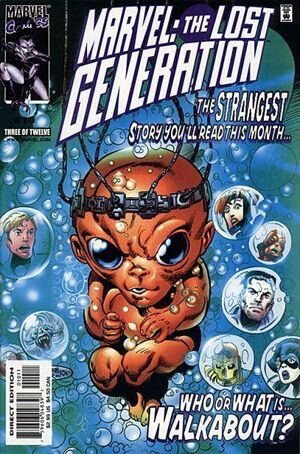 On the coast of Maine, the Carmody Institute is breached by a black-clad intruder. However, he is quickly captured by a robot, Walkabout, who immediately identifies him as Colonel Nick Fury. Fury is amazed at its knowledge of his identity. Walkabout carries Fury over to three of the First Line. He's greeted by Effigy, who he thinks he's never met, until Effigy shape-changes into Under-Secretary Scott, saying they've met before. Fury is angry at him for sending men to their deaths in the Halwan incident. Their argument is interrupted by the voice of William Carmody, who Fury says he thought he was dead.

Meanwhile, below the Institute, the Deviant warlord Kro leads an attack party boring through the ground, saying he knows one of their ancient foes the Eternals is above, encouraging the humans in their super-heroics, something he wants to stop. As they prepare to break through the floor, their quarry, Pixie hears something, though her human colleagues don't. The Deviants blast through and attack, targeting Pixie, though her partner Oxbow and the rest of the First Line soon join the battle to help her. As the battle wages, Cassandra Locke time-jumps in, and hides, wanting to warn them of the danger they face, but not while they're fighting. Fury joins the fight, and Kro orders his forces to continue, wanting to know more of the super heroes.

In Chicago, Truth MacRae is confronted by her parents after they find her scrapbook of the Black Fox. They try to persuade her that he's a fascist, but when her mother Autumn tries to use her light powers on her to calm her, Truth gets angry and calls them hypocrites, then jumps out of the window. Her parents are shocked, until they realize she's inherited her father's superhuman agility. He jumps out after her to follow her. Truth hides in an alley, but starts to feel numb as she feels her body start changing.

Back in Maine, Cassandra watches as Walkabout talks to Carmody, who has been recreated as a shrunken, homonculus-type creature in a tank. Carmody makes Walkabout place his tank inside him and cyber-link with him so he can join in the battle. Effigy realizes the Deviants are targeting Pixie, but when he confronts her about it, Oxbow gets angry and throws him across the room. Cassandra intervenes to make them stop the in-fighting, and tries to convince them she's a friend from the future. Before she can warn them further, they realize Yeti is out of control and in a rage. Rapunzel calms Yeti down with a length of her hair, and while he's distracted, the Deviants try to escape back through the hole in the floor, but are stopped when Oxbow shoots a net-filled arrow over it. Kro thinks his men have failed him and makes them self-destruct. Pixie makes Oxbow remove the net and flies down to find the warlord, but he's gone. Oxbow catches up to her and asks if she'll tell the others she's an Eternal, but she says they wouldn't be able to handle it.

Afterward, the First Line talk to Cassandra, skeptical about her story until she mentions the Skrulls. Effigy gets agitated and starts shaking her, demanding to know if they Skrulls have conquered Earth in her timeline. Cassandra realizes the rest of the team don't yet know he's a Skrull himself, and time-jumps away to learn more before they can stop her. They notice that Fury has slipped away in the confusion.

Later, at C.I.A. headquarters in Langley, Fury briefs his shadowy superiors about the First Line, saying they should keep an eye on them but let them go their own way. After he signs off, his superiors decide to give Fury a more special assignment, Project: S.H.I.E.L.D....

Retrieved from "https://heykidscomics.fandom.com/wiki/Marvel:_The_Lost_Generation_Vol_1_10?oldid=1446070"
Community content is available under CC-BY-SA unless otherwise noted.