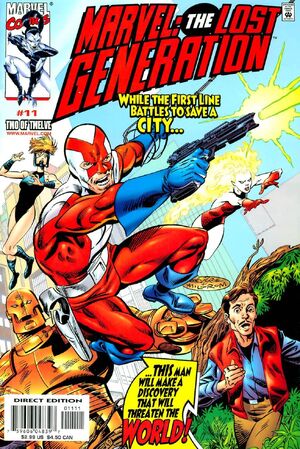 Walkabout rescues the First Line from Nocturne as the villainous vampire infects the Baxter Building with a bio-mechanical organism. Meanwhile, a man who stumbles across a crashed Skrull scoutship is revealed to by a Skrull spy by Reed Richards.

Retrieved from "https://heykidscomics.fandom.com/wiki/Marvel:_The_Lost_Generation_Vol_1_11?oldid=1498937"
Community content is available under CC-BY-SA unless otherwise noted.