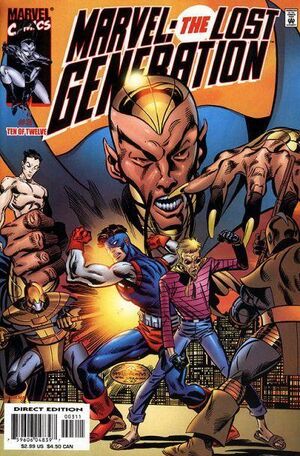 Appearing in "Mad to Live"Edit

Synopsis for "Mad to Live"Edit

It's Spring, 1961, and most of the members of the First Line are in training when in their Rocky Mountains headquarters when Kid Justice runs in with a newspaper, excited about the launch of NASA's missions to the moon. His brother Yankee Clipper is troubled by the news, however, as it proves that what the time traveller Cassandra Locke told him is starting to come true. As Kid Justice starts to badger him about making him a full member of the team, the Clipper remembers his promise to look out for his brother and takes him aside to talk in private.

In San Francisco, the beatnik superhero the Hipster tangles with some drug dealers in an alley. Just as one pulls a gun and almost has the drop on him, the gunman's hand is hit with some glowing dust and turns to stone, the handiwork of a flying girl, Pixie, who then turns most of the other criminals to stone too. One, however, slips away and climbs down into a sewer tunnel. The criminals dealt with, Pixie says she wants to be the Hipster's partner, but he demurs. Annoyed, Pixie flies away, saying she'll find a better partner.

The criminal who escaped runs through the sewers back to his boss, the Yellow Claw. On hearing of what happened, the Claw complains about the growing number of superheroes to his cohort Fritz von Voltzmann, and when von Voltzmann says at least the Invaders are gone, the Claw says they are not all dead, revealing that he has the amnesiac Sub-Mariner as his captive. Von Voltzmann goes to strike the bound-up hero, but the Claw chops his cane in half, saying the Sub-Mariner will be useful to them. When the Sub-Mariner wakes, he demands to know where he is and why he can't remember anything, but the Claw influences him into seeing him as his lord and master.

Meanwhile, in Atlantis, Namora reports to the acting king Byrrah that she can find no trace of the Sub-Mariner, their cousin. Byrrah thinks to himself they must take measures to defend their kingdom. Byrrah's warlord Krang supervises those measures, as the geneticist Vyrra shows him a genetically enhanced warrior he is creating - Mako.

The Hipster stakes out some of the criminals he and Pixie subdued, so he can trace them to their boss, unaware he is being observed by the First Line's Black Fox, who decides he'll have to call in his teammates for backup.

In a building in the city's warehouse district, Cassandra Locke materialises, and witnesses the Claw making the Sub-Mariner put on an armored suit alongside some other armored underlings, telling them some intruders have been detected. The First Line enter the building and battle the armored men. Nightingale notices one (the Sub-Mariner) holding back, and offers to heal his clouded mind, but he runs away.

The Claw reveals to van Voltzmann that he has a bomb so they can booby-trap the building to kill the First Line. The Sub-Mariner surprises him, however, demanding to know who he is. The Claw threatens to set off the bomb, but is struck down by the Black Fox. The Claw shouts that it was a deadman switch he'd been holding, and that the bomb will detonate in seconds. Cassandra desperately tries to time-jump out of the building as it explodes.

The First Line, however have been protected by a force-field projected by the Clipper's belt, even though he didn't know it could do that. He surmises it must have been triggered by an outside force (actually Cassandra's duplicate belt). He drops the field, and they're surprised to see the Black Fox has also escaped death by rappeling up to the roof, riding the blast, taking von Voltzmann as a prisoner with him.

Liberty Girl offers the Hipster membership in their group, but he refuses and leaves. Black Fox tells Yankee Clipper he thinks he saw the Sub-Mariner, making the Clipper realize it was the explosion Cassandra had told him about earlier, and that she must be on her way to meet his earlier self.

Retrieved from "https://heykidscomics.fandom.com/wiki/Marvel:_The_Lost_Generation_Vol_1_3?oldid=1446063"
Community content is available under CC-BY-SA unless otherwise noted.