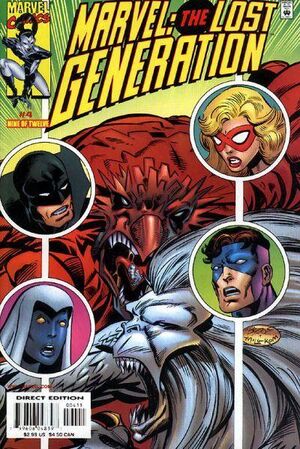 Appearing in "Lightning In The Day"Edit

Synopsis for "Lightning In The Day"Edit

In 1947 in the American Southwest, two Skrulls, Velmax and Zuhn come to after their scoutship has been shot down by an Earth aircraft. They pull themselves out of the wreckage, but are fired on by a man with a shotgun. Zuhn is hit, but Velmax shapeshifts into a monstrous form to attack him. The man tries to escape in his pickup truck, but crashes and is killed. Velmax finds the man's documentation in his pocket and decides he can use it himself, to take on the man's identity of Jake Scott.

Years later, on November 21, 1963 in the First Line's headquarters, Liberty Girl asks Nightingale if there's something on her mind. Nightingale replies that she has a foreboding about that day. They decide to tell the men of the team - Black Fox, Yankee Clipper and Kid Justice, who are training in the gym. When he gets beaten in the training scenario, Kid Justice storms out, and Black Fox questions his place on the team. The two women arrive and tell them about Nightingale's premonition.

In Yellowknife, Canada, Sam Matonabbe is laboring, until he gets hassled by some locals for being a "half-breed". He scares them off by swinging a tree trunk at them and when they run away, he is surprised to be greeted by Pixie, who flirts with him and tells him she's been watching him for some time and thinks he's ready to be her partner. She picks him up and flies him effortlessly away.

Back at the First Line's base, Nightingale tells the rest of the team that all she knows is that her premonition regards something that will happen in Dallas. Realizing that President Kennedy is in Dallas, Effigy realizes they must do something. Meanwhile, near Dallas, Lee Harvey Oswald is readying a rifle when he's walked in on by his wife Marina. They argue and he storms out.

Meanwhile, in an industrial estate near Dallas, criminal Luke Garrow meets with a Mr. Winget, whom shows him a device he created - swtiching it on, it turns Garrow into his bestial alter ego the Howler, which usually only happens in moonlight. The machine also means he retains his normal intellect, instead of becoming feral as usual. Winget reveals his is the shapeshifting criminal Chimera, and proposes a partnership. That night they break into a Stark Industries building to steal a new guidance system, but soon discover they are in a trap as they are attacked by the First Line. While Howler keeps them busy, Chimera changes shape and starts to escape. Liberty Girl blocks his way, but he slashes her across the stomach with his claws, mortally wounding her. Nightingale tries to heal her, but realizes her power may not be enough.

Effigy goes after Chimera and they start to fight, each shapeshifting into different forms throughout. Effigy eventually stans Chimera through the chest with a bone spur, before they realize they are Velmax and Zuhn, formerly Skrull comrades. Zuhn explains he recovered from his injuries and escaped from the med pod Velmax left him in after it was impounded in a laboratory, and burned it down to cover his escape, while Velmax explains he used Jake Scott's identity to enter a political career. Zuhn is confused as to why Velmax would become a hero, but Velmax tries to tell him he's learned a lot since becoming an American.

Cassandra Locke time-jumps into the complex to find the First Line grieving over Liberty Girl. However, she and Yankee Clipper's time belts set each other off by being in close proximity, and they involuntarily time-jump away. Nightingale is distraught, forseeing death. After wrapping things up with the police, the remaining members of the First Line fly off with Liberty Girl's body on board.

In Dallas, Lee Harvey Oswald walks into the School Book Depository, a long parcel in his arms...

Retrieved from "https://heykidscomics.fandom.com/wiki/Marvel:_The_Lost_Generation_Vol_1_4?oldid=1446064"
Community content is available under CC-BY-SA unless otherwise noted.