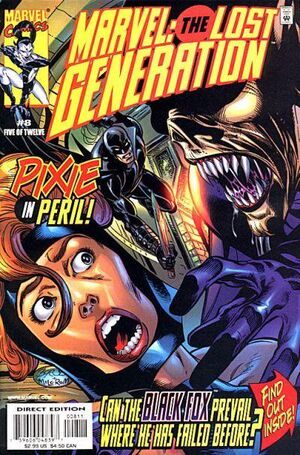 Appearing in "The Tomb Of Diablo!"Edit

Synopsis for "The Tomb Of Diablo!"Edit

In the late 22nd Century in Tranquility City on the moon of Earth-700, Doctor Locke and his team attempt to get a fix on his time-traveling daughter Cassandra. They get a visual of her studying a microfilm reader in 1970s Earth-616, but are interrupted by the Skrull Ambassador Zorn, who protests at her time-traveling, saying it could skew reality. Cassandra resolves to find out more about the Skrulls' presence on 20th Century Earth.

Meanwhile, in Chicago, retired hippie superheroes Captain Hip, Sunshine, and their daughter Truth are attacked by muggers, but Black Fox intervenes and defeats them. Captain Hip berates him afterward for being a fascist, while Truth is impressed and immediately has a crush on him. Black Fox leaves in his Flying Fox craft and returns to his Foxhole base, where he finds Pixie waiting for him. She flirts with him, before saying she'd received a call from Agent Colby calling them to Washington D.C.

Once in Washington, Col,by shows Pixie and Black Fox surveillance photos of a relative of Romanian president Ceaucescu sitting in a café with someone who does not show up on film. They realize it's Black Fox's vampire enemy Nocturne, and Black Fox swears vengeance on him, shocking Pixie with how determined he is. The two of them travel to the place where the photos were taken – Petralova. They go to a hotel to meet their contact, but find him dead in his room, drained of blood, obviously by Nocturne. Captain Hugo of the local militia arrives and is about to arrest them when a new arrival says he will vouch for them, revealing himself to be Doctor Strange.

Later, over coffee, Strange tells Pixie and Black Fox what brings him to that part of the world - he has seen portents that someone may be tampering with the tomb of Diablo, and thinks it is Nocturne. They realize that if Nocturne discovers Diablo's secrets, he could start a reign of terror. The trio head into the woods to find Castle Diablo, and when they find it it is deserted even of wildlife. They reluctantly split up to search it, and Pixie soon discovers what looks like a stopper has been removed from one of the walls, leaving an opening. She flies inside to find weird scientific equipment, some of it recently used, as well as many jars of what looks like blood. She hears someone imploring her to free him from a trapdoor in the floor, and sees his arm reaching out through an aperture. Before she can do anything, Nocturne appears and says his will is stronger, commanding Pixie to obey him.

Meanwhile, Black Fox searches another part of the castle and remembers his first meeting as a novice superhero with Nocturne, when Nocturne broke his legs and forced him to watch as he killed his fiancée Miriam in front of him. Black Fox resolves to kill Nocturne.

Back in the lab, Pixie is tied with rope to a table and wonders why she can't break free as she should be able to, but Nocturne explains his hypnosis is preventing her. He drinks some blood from a jar in front of her, grossing her out, before revealing he is a real vampire, not a fake as she believed. She realizes that's why her pixie dust has never worked on him, as it only affects living tissue. She wonders why he hasn't made more vampires, but he says he doesn't need the competition, before realizing that if he turns her into one, the First Line would have to hunt her down and kill her. As he's about to bite her, Black Fox arrives in the nick of time and drives a stake through him. Black Fox unties Pixie, but they shocked to see Nocturne has survived, until Nocturne tells them staking only works in movies. Nocturne grabs Black Fox to kill him, when a voice says one thing does work against vampires - purifying light, as Doctor Strange shows himself and conjures a blast of sunlight to kill the vampire. However, Strange is shocked to see that the spell doesn't work, until Nocturne reveals the potions of Diablo he has found have restored enough humanity in him to withstand sunlight. He grabs Pixie so he can snap her neck, but on hearing he's now more human, she uses her pixie dust on his arm, petrifying it into stone. Black Fox starts to beat him, but Nocturne turns himself into smoke and flies away. Realizing Diablo's crypt is opening, Doctor Strange realizes he has to focus on the bigger threat by sealing the crypt again, and Nocturne escapes. Strange seals the crypt and replaces the 'stopper' in the wall, sealing Diablo in again. Black Fox curses the fact that Nocturne escaped, but Pixie says she thinks he'll come looking for them, as he'll need the petrified arm he had to leave behind...

Retrieved from "https://heykidscomics.fandom.com/wiki/Marvel:_The_Lost_Generation_Vol_1_8?oldid=1446068"
Community content is available under CC-BY-SA unless otherwise noted.