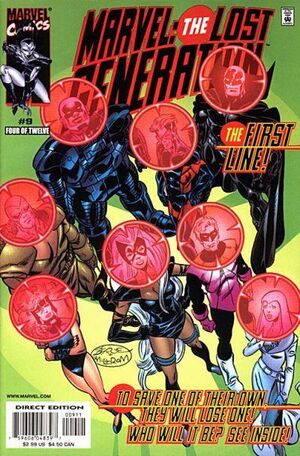 At his estate, William Carmody tries out the prototype of an exoskeleton that will house his disembodied brain, much to the horror of his daughter Mary and the amusement of its creator James Fitzpatrick. They are interrupted by the arrival of Jake Scott, who says he wants to recruit Carmody and his telepathic abilities for a special mission to rescue Mister Justice from the kingdom of Halwan, where he's being held hostage after his plane was shot down. Scott then introduces Carmody to the members of the First Line. Scott explains they'll need Carmody to telepathically link them because ordinary communication with Halwan will be impossible due to sunspot activity.

In Halwan, Mister Justice is tortured by Princess Zafina and her minions, but will not talk. Back in America, the First Line plan their mission - the CIA will rescue the diplomats Mister Justice had been on a mission to free, while they will rescue Mister Justice themselves. Oxbow and Reflex argue when Oxbow thinks Reflex hurt Pixie, and when Carmody tries to read Pixie's mind to find out her deal, he finds he cannot (not realizing that she's an Eternal.

In another part of Halwan, a team led by Colonel Nick Fury break into the compound the diplomats are being held in, but one of his team trips a booby trap, causing an explosion.

Still in captivity, Mister Justice wakes after his torture, being tended to by Zafina's cousin Khadijah, a doctor. Mister Justice flirts with her, saying a doctor shouldn't be party to all of this. Elsewhere in the castle, Cassandra Locke time-jumps in. As she starts to explore, she jumps out of the way and hides just as a hole is quietly blasted in a wall and two of the First Line, Blackjack and Positron come through it. Cassandra recognizes them from her hiding place and realizes they're in the middle of a secret mission that she knows is destined to go horribly wrong. Meanwhile, Black Fox breaches the castle in his Flying Fox plane and tricks the guards who find it with a fake cockpit before overpowering them. Watching from hiding, Cassandra is surprised when she's approached by Nightingale, who recognizes her, much to her shock. As the rest of the First Line arrive, Cassandra says she has to try and save a life.

Making her way through the castle, Cassandra is attacked by Scimitar, but is saved by Blackjack, but Blackjack is then slashed open with Simitar's weapon, mortally wounding him. Positron blasts Scimitar in anger and says she'll get Nightingale, but Blackjack, dying, says it's too late. Cassandra says it's all her fault, but before Positron can find out who she is, she time-jumps away. As the rest of the team continue fighting, they're told to stop as Oxbow appears, having apparently captured Zafina. He says Mister Justice has already escaped in a stolen jet. The First Line escape, knowing the Halwanis won't shoot them down as long as they hold the princess. Until the princess' shape changes, and she turns out to be Effigy in disguise.

At a hospital in Tel Aviv where Mister Justice has been taken, Black Fox discovers that Mister Justice not only escaped, but persuaded the princess' cousin to defect, saved the hostages and in the process destabilized Halwan's regime too. He's furious at Effigy that the First Line's attack, and Blackjack's death, were just diversions. On finding out Mister Justice might not recover from his torture injuries, Nightingale uses her power to heal him. Angry about the way things have turned out, Black Fox storms out and leaves the team, and Pixie worries that without him acting as their conscience, the team could be finished.

Retrieved from "https://heykidscomics.fandom.com/wiki/Marvel:_The_Lost_Generation_Vol_1_9?oldid=1446069"
Community content is available under CC-BY-SA unless otherwise noted.