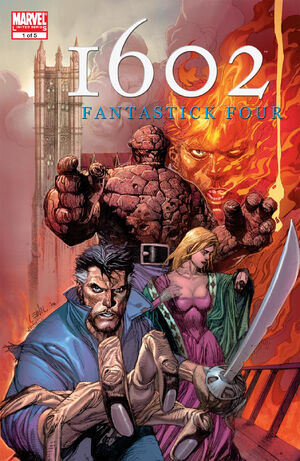 We'll do...nothing. As you say. The world will simply have to survive...without the Fantastick Four.

The Wizard sits at a local tavern, in the year 1602, telling a story of a crew sailing to the end of the world to find a fable city of advanced learning and science. Before he can fininsh his story, an angry patron interrupts The Wizard claiming him to be a swindler. As if on cue, Medusa comes to the aid of her Captain and settles everyone down. For the second time, The Wizard tries to complete his story, but only to be interrupted by von Doom's henchmen, who offer an invitation to The Wizard to meet their master, Otto Von Doom.

As William Shakespeare recites lines from Macbeth, King James I gives the poet a little criticism on how Macbeth is too sympathetic and the play should include witches. When out of the clear blue, a flying ship surrounded by clouds appear overhead with what appears an army of men dressed like Vultures fly down and abduct the renown poet back to the ship. Benjamin Grimm attempts to save the poet to no avail.

Aboard the flying ship, Shakespeare meets Natasha Romanov, who explains that her master wants him to chronicle his trip to the fabled city beyond the edge of the world. The ship turns and heads to Latveria.

In some distance away, Reed Richards watches the flying ship disappear from view, and wants to stop whatever Von Doom is up to, but his wife, Sue Richards talks him out of it because of their unborn child.

Retrieved from "https://heykidscomics.fandom.com/wiki/Marvel_1602:_Fantastick_Four_Vol_1_1?oldid=1441489"
Community content is available under CC-BY-SA unless otherwise noted.