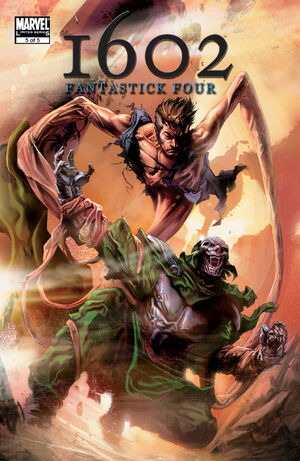 From your strength and his, do I draw mine!

Numenor plays a double-sided card with the Fantastick Four and Otto Von Doom. After a foiled attempt to split the Four, The Magician gabs the trident and raises the city of Benasylum above water. During the chaos, Medusa stones the one love she had ever known as the city begin its descent into the sea. After a quick escape, barely, the Four make back to civilization with the poet in tow. None know that Uatu watches with the earth in the palm of his hand.

Retrieved from "https://heykidscomics.fandom.com/wiki/Marvel_1602:_Fantastick_Four_Vol_1_5?oldid=1441493"
Community content is available under CC-BY-SA unless otherwise noted.