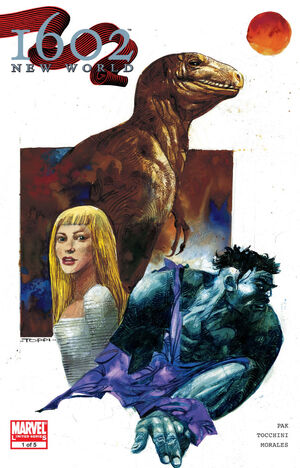 The issue begins with David Banner witnessing the Hulk killing King James I in his own castle. However, this was revealed to be a dream Banner had. As he awoke to find himself with his clothes all torn up, he wondered where he was until he realized it was the New World by observeing a variety of herbivore 'thunder lizards' (dinosaurs). Banner then remembered that his mission was to kill Nicholas Fury and the other Witchbreeds including the Four from the Fantastick. As David was burning with devotion to his mission, he realized his hypocrisy in that he was also a Witchbreed. He retraced his footprints which turned into the Hulk's. David then knew that he himself was lost as he could go back to his king and country because he would be executed. He believed he was damned. His gloomy thoughts were interrupted when he saw a baby brontosaur trapped in a tar pit with its mother unable to help it. Banner sympathetically helped the dinosaur out of the pit. Suddenly, a group of dinosaur predators appeared and charged for Banner and the group of herbivores. The mother brontosaur helped in shielding Banner from the predators but was swarmed over. Banner tried to help the brontosaur but was hit by a tail from one of the predators. Unexpectedly, Banner changed into the Hulk and attacked the surprised predators while bellowing "Hulk SMASH!"

Meanwhile at the Colony of Roanoke, a time had passed after Nicholas Fury transported himself and Rojhaz into a time anomaly. Nick saved Earth-311 and drove out the Four from the Fantastick and Carlos Javier's Witchbreeds. Peter Parquagh worked for Irish immigrant Jonah Jameson as his printer for the Daily Trumpet and was exceling in writing the said events in 1602. Peter was also becoming intimate with Virginia Dare and developing his powers from the spider bite at the end of Marvel 1602 #8.

During distribution of the Daily Trumpet Jonah raised concerns for Roanoke's safety and defenses because he had defied King James and England. Jonah also wondered about David Banner's whereabouts whom he believed posed a threat. Virginia's father and Jonah's friend, Governor Ananias Dare, thought Banner didn't pose much of a threat and planned on simply arresting him. Suddenly the entire colony heard a loud thundering sound which was revealed to be a stampede of dinosaurs. Peter saved Virginia from an initial small pack of dinosaurs by swinging her up into a tree. Peter then tried to convince Jonah to get out of the street but Jonah stubbornly refused so he could pick up his newspapers. Then a larger group of dinosaurs appeared which convinced Jonah to flee for safety. Peter, however, solely stood in the street in a vain effort to stop the dinosaurs from stampeding until Virginia saved him by changing into a T-Rex and frightening the dinosaurs away. As Virginia herded the dinosaurs away from Roanoke, Peter saw a group of children in the path of the dinosaurs and helped the children outrun them. Meanwhile, Virginia saw the same brontosaur and its baby that Banner had saved, lost her inhibitions and attempted to attack the mother. Suddenly the Hulk appeared and battled Virginia saving the mother and its baby as he locked Virginia's mouth.

Retrieved from "https://heykidscomics.fandom.com/wiki/Marvel_1602:_New_World_Vol_1_1?oldid=1441494"
Community content is available under CC-BY-SA unless otherwise noted.