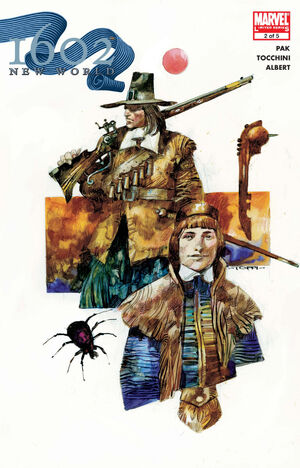 Indeed. I'll not crush this worm. For I am no killer. But do nae fool yourself, boy. The one you know was a killer through and through. And now you may'ave 'im back, for all I care.

Colonist Master Norman Osborne finish negotiating with the Native Americans lead by their chieftess Marioac into a contract agreement in land ownership. However, the tribe are not easily fooled by Osborne's agreement as to his surprise, they know elegantly well in speaking and reading English thanks to Rojhaz, and know that Osborne and people like him will take their entire island "eat the earth and burn the skies." One of the native warriors suggest of killing Osborne right where he is, but Marioac orders not to... for now. Suddenly they hear a large rumbling noise, which Marioac recognized to be dinosaurs.

Peter helps the children as seen in last issue by riding everyone on a speeding stegosaurus. One of the children, a native, accidentally fell off which Peter quickly catches him at the end of the dinosaur's tail with his powers. The Stegosaurus and the other dinosaurs that was stampeding finally calmed down, and Peter and the children meets with Marioac, her people, and Osborne. The presence of the children, who are exhilarated from the ride, peacefully settles the tribe from killing Osborne.

Peter travels his way to Roanoke with her powers and finds Virginia in her T-Rex form still grappling with Hulk in her jaws. Peter immediately recognized Hulk as David Banner from his torn purple robes. Virginia spits Hulk into Jonah Jameson's printing building, much to Jonah's shock. After Hulk jumps away into battling Virginia again, Jonah inspects his printing shop and relieved to find his printing press is left undamaged. However, Peter knocks Jonah safely away as Virginia, knocked out by Hulk, lands on Jonah's printing press, damaging it irreparably. Jonah immediately kicks and berates a motionless Virginia for the damages. Peter take him aback from her in safety as Virginia gets back up and focus on the two. Ananias Dare shoots Virginia with his rifle and prepares to shoot again. Virginia recognizes her father, who is about to attack her, and fled away in tears. Peter quickly latch on to Virginia's tail as she takes him away before Peter meets a brief eye-to-eye to Hulk. As Virginia leaves, the colonists emerge from their dwellings to grasp of what everything happen. Jonah breaks the silence and yells "arrest that man", which the colonists turns their attention to where Jonah's pointing to: the Hulk.

Hulk sees to the mother Brontosaurus' injuries. Jonah, still upset of the destruction of his printing press, wants Governor Dare to arrest Hulk. Governor Dare asks Dougan of what they should do. Dougan comically state that Hulk is too big to fit in the stockade, but he did verify his innocence of fighting off Virginia (which everyone don't know it is really her) from the colony. As Dare is thanking Hulk for his help, Jonah berates away a baby Brontosaur from eating his newspapers. Tired of hearing Jonah's stubbornness and bereavement, Hulk hold him up by the throat. Fortunately, Peter arrives back with Virginia (back to her normal state) and reason Hulk not to hurt Jonah. Hulk questions Peter as to who he is. Peter explain that he will remember who he (Peter) is and Hulk himself, and that he knows he will not kill Jonah, because he is not a killer. Hearing this, Hulk recognize Peter and puts down Jonah. Hulk then tells that he isn't a killer, but "this one" is before changing back into David Banner. Everyone is surprise of this, and Dougan knows that Banner was sent by King James to kill Nicholas Fury and wants to kill him. Dare order him not to as their law is not to harm and kill an unarmed man. Dougan rebuke that Banner is a Witchbreed. Dare reason back that they came to settle the New World to establish a place ruled by free men bound by rational laws. But Dougan still see David for his past vileness as he prepares to raise his sword to execute him. Fortunately, Banner is quickly taken away to safety by the mother Brontosaur.

That night, Peter see to Virginia, who is recovering in her bed. Virginia admits that of all the animals she transforms to are peaceful, she transform into a T-Rex that lost all of her inhibitions and makes her to doubt herself for everyone's safety. Peter leaves and hears the colony's town meeting. Jonah express his anger on Banner, and claims that it was his fault for leading the dinosaurs into the colony in an effort to destroy them while heavily insists on establishing a law on banning all "suprapowered people" from Roanoke. Osborne enters into the discussion and tells that they should be more concern on the local Indians. He furthermore lies in claiming that he saved the children that came with Peter from being killed and "eaten", which the colonists immediately believes him.

After the meeting is over, Peter, who eavesdropped on the entire meeting, confronts Governor Dare and tells him that Osborne is lying about the children being put in danger. Dare then ask him if he have any proof. Peter, from exposing his identity as a Witchbreed, reply that he has none, but he only feels he knows. Dare then lecture that he too felt that Peter would never be seen again after being taken by Virginia, and thanks him for being a hero. But the colony and its inhabitants are vulnerable to anything that threatens them, and needs everyone to have faith and trust in each other to survive, which means that Peter needs to him the whole truth. However, Peter remains silent.

In London, England. At King James' castle, a group of engineers are installing advanced security measures (i.e electric bars) after James' visit by "the Devil." King James talks to an individual, who ensures him that his technologies are not of witchery. James then raises concerns on David Banner's absence as it has been long since his mission to assassinate Nicholas Fury. The individual, who reveals to be Lord Iron (the 1602 version of Iron Man), swear that he will find Banner and that if he betrays his king, he will kill him.

Retrieved from "https://heykidscomics.fandom.com/wiki/Marvel_1602:_New_World_Vol_1_2?oldid=1441495"
Community content is available under CC-BY-SA unless otherwise noted.