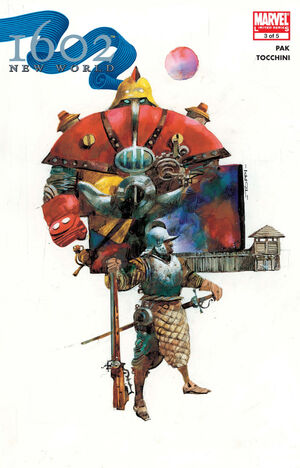 Only God is good. All mere men I know are wicked through and through.

Out in a storming Atlantic Ocean, the English ship, the King's Will, travels to Roanoke. Within the ship, Lord Iron's assistant, a Moor named Rhodes checks on his armor. It is learn that Iron's heart is weak and needs charged "lightning bottles" to keep his heart beating. The bottles are charged low and Irons doesn't has time. Irons climb on the ship's mast and have lightning to strike his armor to charge his lightning bottles.

Back in Roanoke, Governor Dare learns from the colonist children of their adventure with Peter. After questioning them about the Natives having the idea of eating them, he lets them go. During the colony's Assembly, Jonah Jameson argues with Norman Osborne that the children were not endangered by the Indians and that they should focus their concern on Witchbreeds, primarily David Banner. Osborne, however, compares that the Natives are Witchbreeds as one of the children states that the Natives' chieftess (Marioac) have control over the dinosaur they rode on to stop, and suggest that she and her people possess a sort of power that could threaten the colony. As Osborne talks of taking initiative action against the Natives, Peter secretly eavesdrop.

Moments later, Governor Dare recant in front of a search party that the colony had formally decided that Witchbteeds and Indians are forbidden from the colony, and have two days to vacate the vicinity. Dare then inform the search party, which is commanded by Dougan, that they are to search and capture David Banner. And should they encounter Indians or Witchbreeds they are to be inform of Roanoke's new law. Dare then sternly tells them that they must only use violence against the Natives or Witchbreeds if they attacked them. However, Osborne snidely tells Dare that the party refuse to listen his order. Dougan put down Osborne's statement and said that he have attempted to kill Banner if not for Dare's command and laws, and that they must respect their established law; much to Osborne's annoyance. As the party leaves, Peter watches them and is abruptly found by Jonah who orders his assistant to follow the party as it is worthy news to print about, and for personal reason, he doesn't trust Osborne who is going along with them.

As Peter follows the search party, Marioac spies him from her spyglass and meets with Peter. She then tells him that she knows that he is a Witchbreed from learning the native boy Piko who Peter have rescued. Knowing that Peter is technically in danger of Roanoke's laws, she assures him to only hide his powers. Though it is her belief that no matter what with his powers, the colonists will show him no mercy. Then they hear a gunshot in the forest.

The search party have found and are chasing David Banner. Chased to an edge of a cliff, Banner, in a fit of depression, jumps. Fortunately he is caught and saved by Peter, who tells him that their lives belong to God, and to take them before their time would be a sin. Once the soldiers left after looking for David elsewhere, Peter and Banner have time to talk about themselves. Banner says that their lives now belong to the Devil. Peter argues that it is not entirely true and believed that they are gifted to do good. Banner, however, knows what it means for men to be evil as it been "through and through."

Meanwhile, as the party search for Banner, Osborne secretly knocks out Dougan and calls for help, blaming it on the natives. Much later, the soldiers burn down a native village. Osborne inquires them to look after something "shiny, or glittering", but is told nothing of the sort was found. Peter arrived at the village, leaving Banner who tries to catch up to him but only to fell unconscious from swamp gas. He witness Osborne's atrocity and attempts to stop him from ordering a soldier from killing a native's dog for barking him, but prevent so by Marioac from exposing themselves.

Marioac guides Peter to the rest of the Native Americans, who are starting to leave the island with an unconscious Banner as Marioac tells Peter that despite Rojhaz's efforts, there will be a war between the natives and the colonists. Peter protests that there is a way to stop it. He later discusses with Virginia the possibility of using her power to prevent the conflict, but she refuses. Fearing that the instincts of what she might becime might make her dangerous.

Jameson summons Peter to the port, where the King's Will is approaching. Jameson accuses Peter of having no "tingling sense" of when something is about to happen, but it is implied that he does in fact have his spider-sense when he pushes Jameson out of the way of a shot from Lord Iron. Iron is then catapulted ashore and lands in front of Peter and grabs him, demanding where Banner is.

Retrieved from "https://heykidscomics.fandom.com/wiki/Marvel_1602:_New_World_Vol_1_3?oldid=1441496"
Community content is available under CC-BY-SA unless otherwise noted.