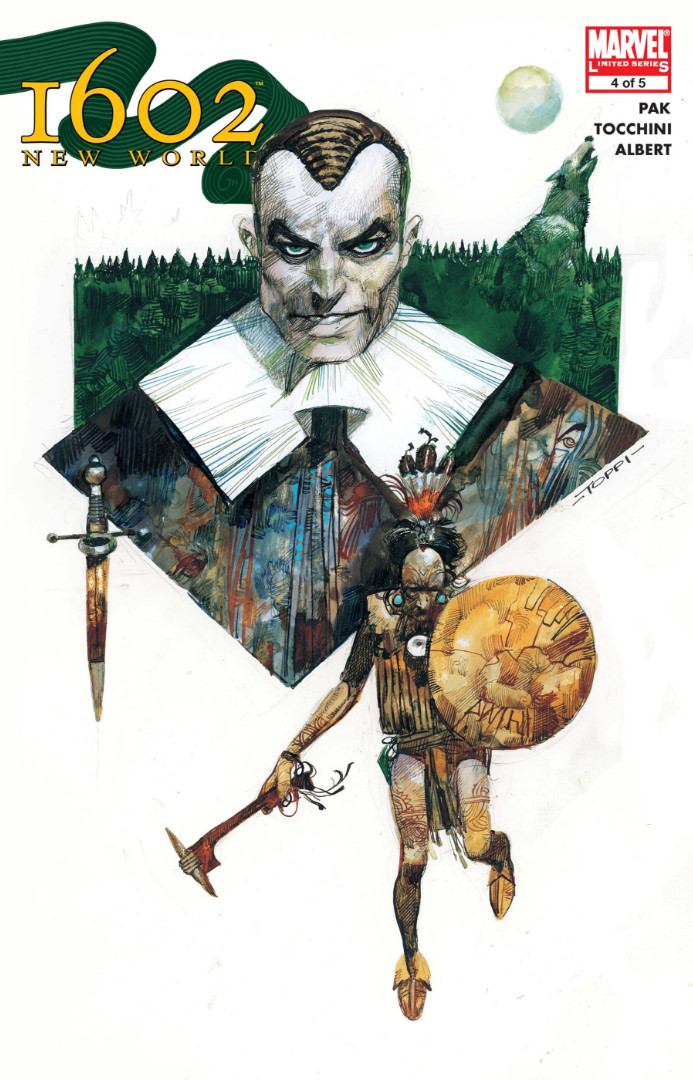 You are the monster. And the monster is you. And you should be grateful. Because that means there's something good inside of you. Something that knows what to do when it sees wickedness and evil running wild. Look into yourself, David. And be the man you want to be.

Lord Iron, still grasping Peter, demands him for Banner. Ananias Dare intervenes, but Iron knocks him away. Osborne then arrives with a squad of soldiers who open fire to no real effect. Iron electrocutes Peter into unconsciousness before drawing an electrified sword with which he attacks the soldiers. As Captain Ross (captain of Iron's ship) and his men surround the colonists, Osborne professes loyalty to James I. Ananias nearby tells Peter to run away and hints that he knows that he is a Witchbreed.

Ross accuses Dare of treason, citing his declaration of independence from Great Britain. Although Jonah Jameson claims that if Dare is a traitor they all are as everyone in the colony voted to be independent from Britain. However, Ananias defends the colonists' sake and willingly takes sole responsibility. Outside, Iron and Rhodes are interrogating the colonists, specifically women and children, about Peter's whereabouts. Virginia coy with Lord Iron, who angrily tells her that he came only for David Banner. Virginia shows him part of the damaged colony caused by her and the Hulk, and tells Iron that Banner will crush him, but they are interrupted by Ross announcing that Ananias will be beheaded at dawn for treason. Shocked in hearing this, Virginia attempted to change into a wolf to save her father, but Peter approaches and stop Virginia as she couldn't control over herself, and promises to save her father. Though, Virginia still insists that he needs help.

Virginia offers to lead Iron and Rhodes to Banner, which they accept. As the three leave the colony, Ross encounters them and ask Iron to help him search for Dougan. However, Iron intimidatingly refuses and that he promise Virginia in guiding him to Banner in exchange for ensuring her father's well being. After the three continue on, Osborne watches on amusingly.

That night Osborne meets with Ross at a dockside bar and tells him of his belief that the natives are hiding something. Ross thinks that he meant for gold, but points out that all he could find are beads, buckskin and such from the Indian camp as he pour the items out on a table. Osborne correctly tells Ross that for years there has been strange lights that have been appearing in the marshes where the natives used to live. Also people such as Rojhaz and Banner possess incredible powers from the marshes, and believe something that is similar to the Philosopher's Stone or the Holy Grail is what changed them, which Osborne calls it "the Source". Concerned, Ross believes they must find and destroy it. Osborne is visibly disappointed in hearing this as he wants the Source for himself. However, he does not say anything and plays along with Ross's plan. Ross decides that after Banner is captured they will attack the natives. A soldier then informs Ross that their scouts discover Dougan and his men. Ross then orders to have only ten soldiers to find him and his men as his army needs to be prepare for battling the natives. After Ross and Osborne leave, Peter lands on the table and picks up the native's items.

In the woods, Dougan's patrol apologize to Dougan for believing Osborne and his treachery. Dougan believe that Osborne will finish him off and order his men to be alert. But they run into Ross' ten English soldiers. Before blood is shed, a fast moving form attacks and quickly subdues the soldiers. The figure is none other to be Peter, disguised and calling himself the Spider. After the group are bemused and joke of the Spider's identity, the Spider tells Dougan of Ross's plans.

Meanwhile Virginia has led Iron and Rhodes to the destroyed native village and threatens to kill them unless they forswear their loyalty to the English, which they converse in Spanish and agrees. Iron unmasking himself and tells Virginia that he has no loyalty to King James.

Sometime later, both Banner and Iron share a nightmare. From Iron's is of Banner torturing Iron for the secrets of his weapons, while from Banner's point of view, seeing more imagery of his past atrocities committed by his nation and his misdeeds. As Lord Iron dreams, Rhodes explain to Virginia of his master's vendetta on Banner as he was previously captured and tortured by Banner into giving the English his secrets in military technologies. The tortures is also what caused Iron's current heart condition.

When Banner wakes up, Marioac introduce herself and tells of the English's presence. Banner laments of his past atrocities, but Marioac points out to him that he did made one good deed in saving the mother Brontosaurus and her babe from Virginia's T-Rex form. Marioac then ask him why he is afraid. Banner respond that he fears that the monster, the Hulk, inside him wants to kill him because he hates him. Marioac smacks Banner and sternly tells him that the monster is himself and reasoned that he should be grateful because the Hulk that is inside him symbolize that there is pure good within Banner. And then finally tells him to look at himself and be "the man you wanted to be."

Later. The natives then sail via Mammoths and Dinosaurs to Roanoke with the Hulk alongside them as Marioac proclaims that they will make history.

Retrieved from "https://heykidscomics.fandom.com/wiki/Marvel_1602:_New_World_Vol_1_4?oldid=1441497"
Community content is available under CC-BY-SA unless otherwise noted.