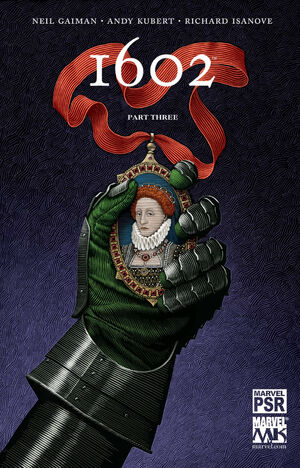 Dear God, who made us what we are. Who gave us our talents, making us each different, who gave us our gifts. In your infinite mercy and wisdom, allow us to share our gifts with the world, and not to hide our talents beneath a bushel. Grant us freedom from those who hate us, and would destroy us. And let us, while hated, not in turn give in to hate. Amen.

Appearing in "Part Three; In Which There Is Much To Be Learned and the Queen Is Given a Gift"Edit

Synopsis for "Part Three; In Which There Is Much To Be Learned and the Queen Is Given a Gift"Edit

Rojhaz climbs to the roof of Hampton Court and meets Stephen Strange, who gives him some net. Doctor Strange summons Virginia Dare using the mystical arts. The transformed girl attacks Stephen in the form of a griffin, and Rojhaz captures her with the net. Stephen begins work transforming the girl back to her original state. When Sir Nicholas shows up, Doctor Strange works to cover the transformation event with the assassination attempt.

At the Fortress of the Inquisition in Spain, Brother Tomas tells the Grand Inquisitor that he has sensitive matters that they need to discuss alone. The Grand Inquistor takes the conversation to some underground caverns. Brother Tomas says that he has heard rumors that he has begun to talk with King James of Scotland. Tomas takes out a knife and prepares to kill the Inquisitor. However, the old man takes magnetic possession of the knife and makes Tomas stumble into a deep pit.

Apprentice John Grey goes for a walk on the grounds of Javier's Select College for the Sons of Gentlefolk and Werner "the Angel" flies by and lands on a tree. John joins him using his powers to mentally push himself to the tree. They speak of a time when humanity might live side-by-side with the so-called "witchbreed". Scotius Sumerisle yells at them to get down and to get prepared for morning prayers. There, Javier offers a prayer that they will be accepted in society.

Matthew Murdoch and Natasha have to stop at an inn because their horses are exhausted. Natasha tries convincing a colonel to sell them his horses and a large soldier starts to pester him into singing. Matthew tells the colonel that Natasha is the "the most dangerous woman in Europe" and that he better sell her his horses. The colonel draws a gun on Matthew and Natasha makes short work of taking down the soldiers. The two spies ride on south on the stolen horses in search of the weapon.

Sir Nicholas warns Queen Elizabeth of a potential assassination attempt, but she chooses to ignore him, saying that there have been assassins before, and she is still alive. Just then, the Latverian envoy arrives to present her gifts from Count Otto von Doom.

Peter Parquagh goes to Doctor Strange's house to tell the doctor that the Queen wishes him to attend Virginia Dare. Clea Strange finds her husband deep in meditation, as his astral form is on the Moon searching for an answer. Clea brings him out of meditation and Stephen talks with Peter about the Queen's wishes.

Sir Nicholas visits the prison cell of the assassin who meant to kill him, and offers a deal. Sir Nicholas will give the hit-man his sword and the chance to fight for his freedom if he could kill the unarmed Sir Nicholas. However, if Sir Nicholas were to win, then the assassin would have to talk. The assassin agrees, and Fury manages to win the vicious fight.

Doctor Strange attends to the ill Virginia Dare. Rojhaz says these transformations have happened before. Stars appear in the room, and Strange deduces that the strange occurrences in the weather has its roots in that room. Sir Nicholas interrogates the assassin and learns that Count Otto von Doom sent him. However, it is too late for Sir Nicholas to save the Queen as the assassination attempt has already succeeded.

Retrieved from "https://heykidscomics.fandom.com/wiki/Marvel_1602_Vol_1_3?oldid=1441483"
Community content is available under CC-BY-SA unless otherwise noted.