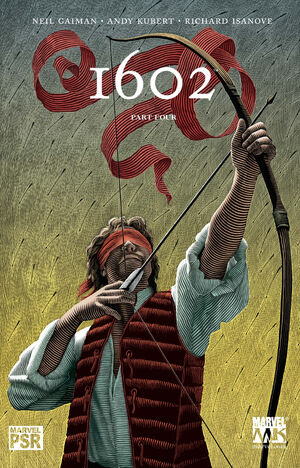 Goodbye, Matthew. Tell your gods or your devils that the most dangerous woman in Europe sends them her love.

Appearing in "1602 Part Four; In Which Much is Explained and Things Do Not Always Work Out for the Best"Edit

Synopsis for "1602 Part Four; In Which Much is Explained and Things Do Not Always Work Out for the Best"Edit

Virginia Dare wakes up in The Bleeding Heart Inn after being sick for a week. Mistress Clea Strange attends to her, and soon Doctor Stephen Strange arrives at her room with Rojhaz bringing some soup for her. Doctor Strange tells her that she transformed into a griffin while Queen Elizabeth received her at Hampton Court. Doctor Strange explains that he had managed to transform her back into human form using the magical arts he had learned while searching for secret herbs from the East.

With the Queen's recent death, James of Scotland will soon receive the crown. Sir Nicholas Fury meets his new master in Newcastle and tells him that he has evidence that an agent of Count Otto von Doom performed the assassination. King James discounts this evidence, saying that the Witchbreed actually did it, and orders Fury to capture them.

On their journey to recover the secret weapon of the Templars, Matthew Murdoch and Natasha encounter a bridge. As they cross it, Natasha convinces Matthew that they are close enough to their destination for him to diverge its location. However, Natasha turns on Matthew, smashing a bottle of wine over his head and sending him plummeting into the cavern below.

Sir Nicholas tells Peter Parquagh of King James' desire to capture the Witchbreed. He tells Peter to send Carlos Javier a message. In Spain, Petros tells the Grand Inquisitor that James will turn over any surviving witchbreed to him.

From his castle in Latveria, Count Otto von Doom conducts an experiment where he electrifies a dead frog to reanimate it. Count Doom starts theorizing about creating an army of dead men to take over Europe when an earthquake-like force starts shaking the castle. Doom goes down to the vault in the mountain and tells his prisoners that they will now have to without food for a week. Doom talks with one particularly able-minded prisoner about creating an poisons and machines on the condition that Doom told him about the strange weather.

Peter arrives at Javier's school, where he is promptly pinned down by the Beast. John Grey recognizes Peter as a friend, and invites him inside. Peter gives Fury's message to the Witchbreed: Fury and his soldiers will come tomorrow to take them captive. Peter urges them not to fight back or run away. Despite his student's protests, Javier says that he trusts Sir Nicholas and will give him his bloodless surrender.

Virginia tells Doctor Strange that she acquired her transformation powers when she lived in Roanoke and was playing with her friends when she found a glistening object floating in the air and she touched it, turning into a fawn. Rojhaz tracked her down and waited until she became normal again. Virginia says she changed two times after this incident, and each time Rojhaz would look after her.

Natasha meets with the Old Man of the Knights Templar and he shows her what he claims to be the secret weapon, a gold ball. Natasha and her soldiers turn on the Old Man and two men detain him. Matthew Murdoch frees the Old Man from his two captives, but Natasha's soldiers surround the opening of the cave and take both of them captive for Count Doom.

Retrieved from "https://heykidscomics.fandom.com/wiki/Marvel_1602_Vol_1_4?oldid=1441484"
Community content is available under CC-BY-SA unless otherwise noted.