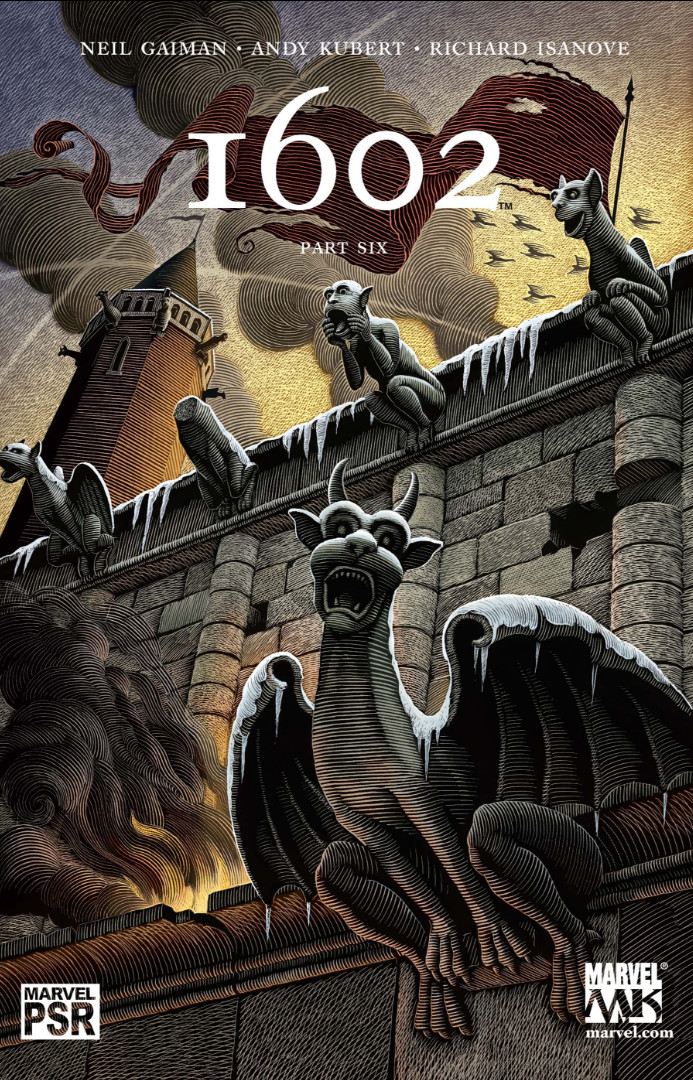 Stephen Strange finds himself on the Moon in astral form, summoned by Uatu the Watcher. Uatu explains to Strange that Watchers are beings who observe events. Uatu says that during the last month, he has pushed his mind and spoken through his mouth, admitting that he had made Strange certain that the world was ending. Uatu explains that the destruction of single world would not compel him to action, but on further inspection, he and his colleagues have realized that the paratemporal fault line would expand from this universe at the speed of light and destroy all others.

Uatu explains his hypothesis for the cause of this space-time anomaly. He posits that the "Forerunner", the entity that initiates the season of heroes and marvels over three hundred years in the future has been sent back in time to the present through a means that will "punch a hole through time," creating the paratemporal fault line. Uatu admits that he does not know who this time traveler was, as his watching is restricted to the laws of the universe. However, Uatu says that his colleagues prefer a different hypothesis, where the Forerunner's arrival signals to universe to start this age of heroes, which also created the simultaneity. Uatu shows Stephen the world through his eyes, and makes Stephen promise to a code of silence and inaction toward this knowledge.

Werner the Angel stretches on a short flight before returning to his flying ship, which is kept aloft by the psychic powers of "John" Grey and Carlos Javier. Scotius Sumerisle reprimands Werner for "parading about, near naked." Sir Nicholas Fury interrupts their argument by telling Scotius to notify Carlos that they need to raise the ship higher in the air to clear the Austrian Alps. Werner wonders why Scotius seems to hate him, and Sir Nicholas replies that he is afraid that "she" likes him. When Werner questions who "she" is, Sir Nicholas turns the conversation to battle plan strategies.

In the deep cells of Count Otto von Doom's castle in Latveria, Benjamin Grimm pushes himself from one side of the wall to the other, creating a new crack. In the high cells, Matthew Murdoch uses his enhanced senses to listen to Count Doom's conversation with Petros in the courtyard. Petros warns Otto of a flying ship carrying witchbreed creatures. Otto gets a message verifying Petros' warning. Count Doom summons his guards to capture Petros, but the young man proves much too quick for them. Count Doom start to prepare for the invasion.

While Benjamin continues to shake the castle, Donal asks Matthew to get them both out of the cell, down to the courtyard to get to the cart. As the flying ship, The Eagle's Shadow, nears the castle, Count Doom counters with an attack of cannon fire and Vulture-Fliers. As the Thing continues to shake the castle, Susan Storm breaks free from her reinforced glass chamber in Doom's bedroom. She knocks out Natasha, Doom's former lover who had decided to take the opportunity to plunder Doom's gold.

Matthew pulls the chains from the cell wall, and manages to skirmish down while carrying the Old Man. Donal goes to the cart and picks up his stick, which he reveals to be the real Treasure of the Temlpars. As guards approach them, the Old Man taps the stick against the ground, causing a deafening crash of thunder and rain to fall from the cloudless sky.

The rain causes most of the Vulture-Fliers to plummet down to the ground, Roberto Trefusis uses it to freeze Doom's cannons. The recently escaped Four from the Fantastick confront the monarch. Count Doom threatens them with the golden ball, saying he only needs lightning to unleash its power. Just as he wished, lightning strikes the ball, breaking it apart, but knocking him to the ground. Richard Reed pronounces the monarch dead, and the Norse god Thor lowers the ship for the heroes to board, except Matthew, who elects to go back home in his own way.

With all of the heroes gone, Natasha is horrified to find Count Doom to be apparently dead, and even more horrified as Count Doom pleads for her to hide his face. In Domdaniel, Spain, Petros delivers news of the Witchbreed's victory against Count Doom. An agent of the Pope captures Petros with a net, and Petros learns that Toad has betrayed them in return for his life.

Retrieved from "https://heykidscomics.fandom.com/wiki/Marvel_1602_Vol_1_6?oldid=1441486"
Community content is available under CC-BY-SA unless otherwise noted.