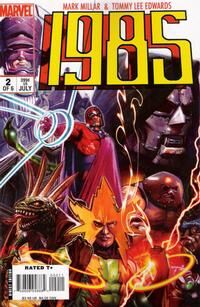 Hulk, with Banner's persona in control, attempts to calm Toby and tell him that he's just looking for Juggernaut. Juggernaut attacks and the two battle while Toby looks on for awhile, then flees the destruction they cause in the woods. Toby finds his father who was visiting Clyde and explaining about the comic book store getting ahold of his old comic books. Toby tells his father about Hulk and Juggernaut and even shows him the destruction their battle caused, but his father tells him to keep quiet about it. Later, Toby's stepfather announces at dinner that he might be taking a job in England. Toby angrily bursts out at his mother that his father is his family and that the only thing she likes about this 'jerk' of a stepfather is his money. Toby runs from the dinner table up to his room. The stepfather is nonplussed but Toby's mother is angry. In town, Sandman and Electro attack Edgar Bowman and Dolores Franks.

Retrieved from "https://heykidscomics.fandom.com/wiki/Marvel_1985_Vol_1_2?oldid=1441500"
Community content is available under CC-BY-SA unless otherwise noted.