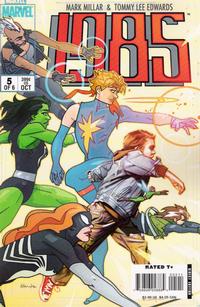 Trapster falls through the portal in pursuit of Toby and is struck by a motorist. Toby asks a cab to take him to Avenger's mansion and eludes Trapster. Toby tells his story to Jarvis so that he can be let in to see Captain America, but Jarvis doesn't believe him and refers him to the Baxter building. Toby arrives and speaks to Roberta the robot receptionist who doesn't have a problem with his story about parallel worlds, but tells Toby there are currently three emergencies awaiting the return of the Fantastic Four. Toby spies someone reading a copy of the Daily Bugle and figures he will go there and ask for Spider-Man's help. Toby gets Parker's attention by claiming to be Harry Osborn's little brother and Parker meets with him on the roof. Peter is initially skeptical but Toby convinces him that he knows he is Spider-Man because he has read all his comics and he needs his help. Meanwhile, Toby's dad has rescued his mom from having her head torn off by Werewolf by Night and is driving her back towards the soldiers who have arrived to combat the super-villains. Toby's mom thinks the man is useless in a crisis, but he tells her he knows the super-villain's weaknesses as he has seen them beaten dozens of times in the comics, just as Galactus arrives and proclaims, "I Hunger."

Retrieved from "https://heykidscomics.fandom.com/wiki/Marvel_1985_Vol_1_5?oldid=1441503"
Community content is available under CC-BY-SA unless otherwise noted.