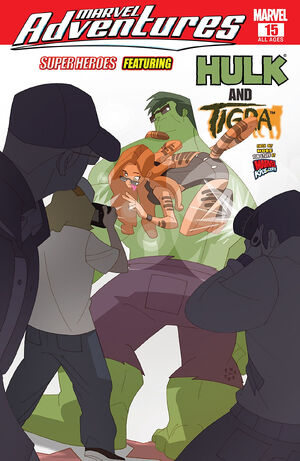 Ahhh, the majesty of a Hollywood! The glamour! The glitz! Beautiful dresses! Well-tailored suits and a pair of... purple pants? When the Hulk and Tigra show up on the red carpet for Hollywood’s biggest awards night, a veritable shoo-in to win Best Documentary for the critically acclaimed "Don't Look At The Camera: 3 days in the life of the Hulk", it looks like it's going to be a truly magical night... that is unless the supervillain known as Mysterio gets mad that HIS studio doesn't win Best Special Effects and takes over the entire awards show in order to create an illusion that an alien armada is attacking New York, fooling the Hulk into thinking he's defending the city when he’s really destroying it. But what are the chances of THAT happening. (Hint: It does.)

Retrieved from "https://heykidscomics.fandom.com/wiki/Marvel_Adventures:_Super_Heroes_Vol_1_15?oldid=1441622"
Community content is available under CC-BY-SA unless otherwise noted.