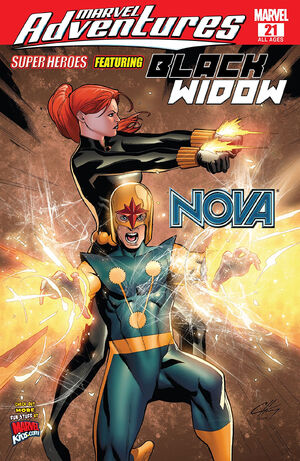 FINAL ISSUE! Who remembers Gary Gaunt? Considered a monster during World War II, he was secretly dropped behind German lines so his terrible “Jekyll and Hyde” transformations would disrupt the German war effort. Gaunt…forgotten by society, has been able to control his hideous transformations for over 60 years…but when his special serum is stolen, Nova and the Avengers find themselves at ground zero with the strangest man/ monster of them all!

Retrieved from "https://heykidscomics.fandom.com/wiki/Marvel_Adventures:_Super_Heroes_Vol_1_21?oldid=1441624"
Community content is available under CC-BY-SA unless otherwise noted.