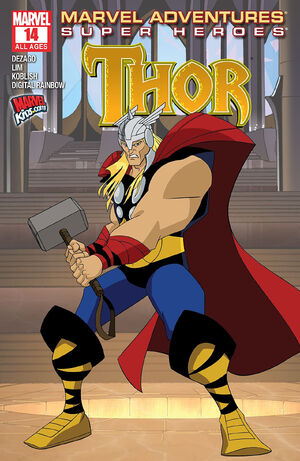 Thou hast great courage and thou even greater intelligence in seeing through Kryllk's devious scheme! That he would escape his prison and acquire yon crystal were happenstances caused by the actions of a looting mortal's rock.

Appearing in "Out of Time!"Edit

Synopsis for "Out of Time!"Edit

The Looter "borrows" the electromagnetic refractualizers at the Institute for SeismoHarmonic Studies to find his meteor's geologic twin. While Spider-Man analyzes the situation, the cops charge in on the scene. Looter sets off an explosive which knocks Spider-Man out of the building through a skylight window. Thor catches Spider-Man.

Thor uses his hammer to protect Spider-Man from the coming cataclysm, which turns out to stop time. Thor says he has seen this happen before, when his father used the Frostgaard Crystal to stop a horde of trolls. Thor realizes the leader of that horde must now have the Crystal. Thor and Spider-Man fight off the troll horde in New York, until realizing the exact same horde is also in Asgard at the same time. Thor and Spider-Man both attack the leader, who stole the Crystal, at the same time, causing the army to fade away. Odin summons Thor and Spider-Man, and tells them that disturbances caused by the Looter's rock helped the troll horde escape. Odin sends Spider-Man and Thor back to New York a moment before time froze.

Retrieved from "https://heykidscomics.fandom.com/wiki/Marvel_Adventures:_Super_Heroes_Vol_2_14?oldid=1488952"
Community content is available under CC-BY-SA unless otherwise noted.