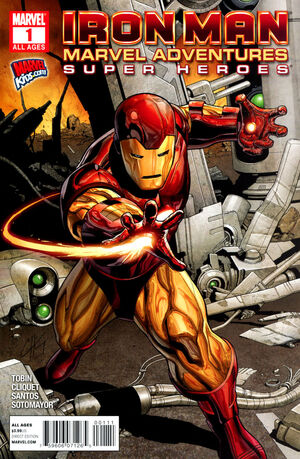 Thor not only doesn't speak softly. He carries a big stick. And a divinely fat wallet.

Captain America and Iron Man appear before the United Nations and other groups to explain who the Avengers are and what their intentions are. Meanwhile, the rest of the Avengers face off against Magneto and his Brotherhood of Mutants.

Appearing in "My Friend, My Enemy"Edit

Synopsis for "My Friend, My Enemy"Edit

Retrieved from "https://heykidscomics.fandom.com/wiki/Marvel_Adventures:_Super_Heroes_Vol_2_1?oldid=1441625"
Community content is available under CC-BY-SA unless otherwise noted.