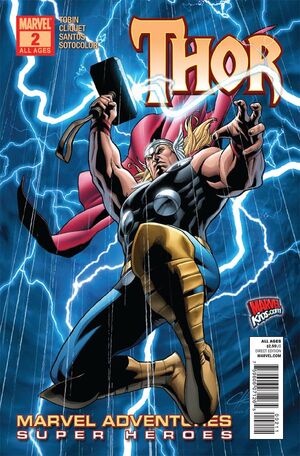 Who will be the new herald of Galactus? It seems the devourer of Worlds is in need of a new right hand and thousands of frenzied would-be-heralds are out to prove they are up for the task. Can Thor, Iron Man, the Black Widow and the Invisible Woman stem the tide of mayhem, and uncover the truth behind Galactus’ call?

Retrieved from "https://heykidscomics.fandom.com/wiki/Marvel_Adventures:_Super_Heroes_Vol_2_2?oldid=1441626"
Community content is available under CC-BY-SA unless otherwise noted.