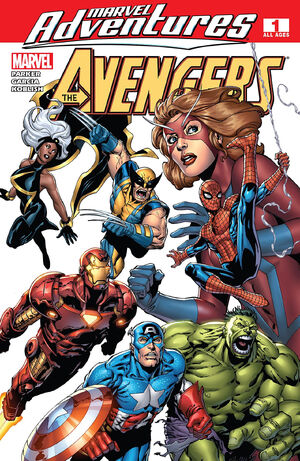 Wow, that's got to be an everything-went-wrong speed record!

The Avengers have been the World's Mightiest Heroes for a while, but are told they will be succeeded by a computer system named Ultron, since they, being human or something at least something similar, will eventually tire and thus retire, begging the need for a tireless, always active guardian of peace. Ultron's capabilities are reviewed, and, as one of them is logical thinking, it soon realizes that humans are inferior in intelligence to it, and decides to correctly restructure the Earth's hierarchy. Go figure.

After a brief, but fierce battle ends in Avenger victory, the heroes are then sent to the West Coast to take down an Ultron Base there. The Avengers arrive and each of the small groups they split into takes down the Ultron forces they face in their own fashion, eventually regrouping in a center plaza of the high-tech base. Ultron realizes that victory is impossible and retracts its influence from the individual infantry robots. Spider-Man points out that it seemed too easy, and finds out why when the base's self-destruct sequence is initiated.

The Avengers barely make it out alive, but are unharmed nonetheless. They are debriefed at a military base with a warning that Ultron may return.

Retrieved from "https://heykidscomics.fandom.com/wiki/Marvel_Adventures:_The_Avengers_Vol_1_1?oldid=1441630"
Community content is available under CC-BY-SA unless otherwise noted.