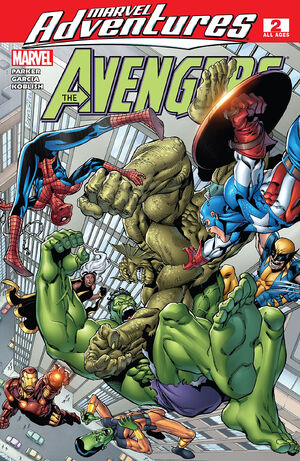 Appearing in "The Leader Has a Big Head"Edit

Synopsis for "The Leader Has a Big Head"Edit

The Avengers are called to a ocean-based lab to keep giant-sized sea creatures under control. Doctor Banner, under the stress, hulks out and proceeds to attack a giant lamprey. It bites down on him, but Hulk does something, no one knows what, to make it spit him out. Hulk sails through the air and lands on a massive Man-of-War, getting stung and beginning to drown.

Spider-Man dives to save him, but is swallowed up by a submarine on the way to the surface. Several armed men brandish their weapons at Spidey, who is albe to identify their commander as the Leader. Leader takes Spider-Man and the Hulk into his sub and talks about his plan to distract the Avengers with mutated sea life, achieved by a Mutagenic Broadcaster.

Hulk wakes up and manages to break out of his restraints, prompting Leader to introduce Abomination, intending to keep Hulk busy. He regrets the action shortly after, though, and simply voice-commands a force field to entrap the two super-strong brawlers, saving Leader from being a bystander to the long and devastating conflict that would result if he had not. Leader than beings monologuing about his origin and plans for world domination. Spider-Man uses the Leader's absorption in his own words as an opportunity to destroy the force filed generator, done with a flying kick since Spidey's arms are still restrained.

Leader offers the switch Hulk's condition with Abomination's via a dual-chambered power transfer unit, giving Blonsky the option of switching between human and hulk forms and ensuring Banner never again replaces Hulk when he calms down. Hulk almost takes the offer, but Spider-Man persuades him to rip a hole in Leader's sub instead. The sub, though damaged, arrives on Leader's island base, and, now that there is more room for Hulk to fight Abomination, Leader tells his muscle-bound operative to administer the beatdown.

The Avengers, still at the lab, have noticed that all the sea creatures are returning to normal size, and have also noted that Spidey and Hulk are missing. Iron Man is able to locate Hulk, though, since Abomination punched him six hundred feet straight up. Stark takes off for the island, with the Avengers following in the Quinjet. Abomination also hurls Spidey high into the air, only to be caught by Iron Man. Leader's men train a death ray on Hulk, while Blonsky takes advantage of his weakness and repeatedly bashes Hulk. Wolverine, to take down the force field around the base, teases Hulk until the giant gets mad enough to smash both the death ray and Blonsky into submission. He then tosses Blonsky at the force field projector, letting the Avengers in and sealing a victory for the heroes.

Retrieved from "https://heykidscomics.fandom.com/wiki/Marvel_Adventures:_The_Avengers_Vol_1_2?oldid=1441631"
Community content is available under CC-BY-SA unless otherwise noted.