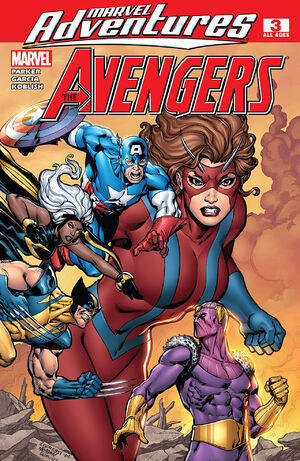 I believe we are equals in leadership, but I will say this... my posters sell better.

At Stark Tower the Avengers attempt to come up with a plan to save Captain America. Iron Man says he is getting two signals from Cap. One is from an active volcano so the Avengers decide to sent the back-up Quinjet to that island, remote controlled by Dr. Banner.

In Zemo's base he gloats about he he has finally beaten Captain America. Cap sees the volcano erupt on the Quinjet and realizes his plans. As Zemo leaves the Avengers break in and free Captain America. They take out the androids and find Zemo outside. Storm is attacked by a robot but Iron Man saves her and says he was helping Giant Girl with Zemo's "big surprise". As Zemo says the Avengers will regret leaving the Hulk behind he activates the War Walker Omega. A giant robot rises from the ground and traps Zemo. He complains and says it must attack the Avengers. It takes off its helmet to reveal Giant Girl. Zemo says he will never stop fighting and the name of Zemo will be restored. Captain America says he is now positive who he is. he pulls his mask off and Spider-Man claims it is the amusement park owner and he would have gotten away with it if not for us meddling kids. Storm asks what he is talking about and he asks if she ever watches cartoons. Captain America says this is Baron Zemo's grandson, Helmut. He says he will never stop fighting. Cap says he knows so they never will either. Giant Girl hands Cap his shield.

Retrieved from "https://heykidscomics.fandom.com/wiki/Marvel_Adventures:_The_Avengers_Vol_1_3?oldid=1441632"
Community content is available under CC-BY-SA unless otherwise noted.