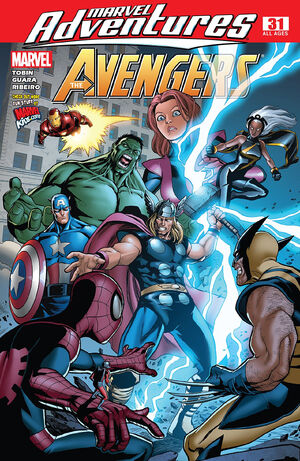 Appearing in "Good Things Come To Those Who Bait"Edit

Synopsis for "Good Things Come To Those Who Bait"Edit

Iron Man, Luke Cage, Hulk, Tigra, and Spider-Man are taking a vacation in California. Hulk wants to see the beach, and, while Tigra expresses her cat-like dislike of water, Spider-Man takes them there anyway. Shortly after, he begins pressing weights to show off his strength.
Meanwhile, Iron Man and Luke Cage have gone fishing, and they soon get so competitive it turns into a bet. Neither know much about fishing, so they both cheat, Tony in particular attracting fish with a sonar wave. This attracts a very angry Namor and his pet fish, Ratoom, whom Iron Man apparently woke up, to the surface.
Spider-Man has been humiliated by the Hulk showing off his guns and goes off to get more ice cream. Thor drops in, and Spidey directs him to New York, where Storm is. Shortly after this, Tigra points out Ratoom to Spider-Man. They rush off, swing out to sea, and land on Ratoom next to Namor, all the while Tigra expressing her dislike of water. Namor hurls them both into the water and goes to confront Cage and Stark. Luke Cage punches Namor, who returns by socking Luke over and doing a flying double-fist slam onto Luke, knocking him out. Iron Man shoots repulsors at Namor, but Namor forces his way through them and damages Iron Man's headpiece.
The Sub-Mariner flies back into the ocean, where Spider-Man and Tigra still are. He mounts Ratoom again, and gives chase after the pair, who borrow a jet-ski to get away in. They drive it up onto the beach where Hulk is with nothing to do. The approaching Sub-Mariner relieves his apparent boredom. He manages to smash Namor into Ratoom's mouth, where he hits Namor again, driving him into the back of Ratoom's head, knocking them both out.
Iron Man apologizes to Namor after the Sub-Mariner regains consciousness, and Namor accepts because Iron Man's being defeated easily in battle and the fishing contest (which Hulk won by knocking out Ratoom) is penance for his trespass.

Retrieved from "https://heykidscomics.fandom.com/wiki/Marvel_Adventures:_The_Avengers_Vol_1_31?oldid=1441643"
Community content is available under CC-BY-SA unless otherwise noted.