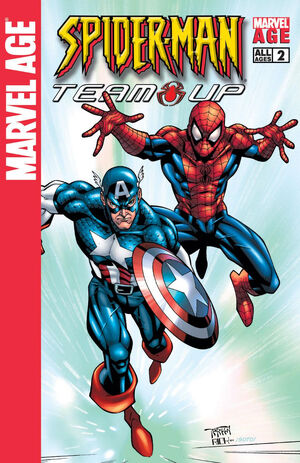 I can see where it might be hard to figure out who and what to stand up for... but don't you see-- all those things that you mentioned that make you so frustrated... are many of the the same things that make me proud to be an American. Because in America we have the freedom to speak out about what we believe in, to offer up new ideas about how to do things.

Spider-Man swings through the streets of Manhattan and notices Captain America fighting some agents from A.I.M. Spider-Man joins Cap with the fight. Cap stops one A.I.M. agent and asks him for his name. Cap orders Spider-Man to not follow him for his next mission. Spider-Man follows him to his stakeout anyway, and Cap lets Spidey join him.

The Grey Gargoyle arrives at a nearby building as expected and uses his petrification powers to stop the guards. A.I.M. members flood the facility as the Grey Gargoyle finds a jug of liquid believed to be half the super soldier serum. The Grey Gargoyle throws petrified desk at Cap, but Spider-Man stops it with his webbing. The Gargoyle petrifies Cap and Spidey and chains them up. They come to sooner than expected, and Cap reveals the "super-soldier serum" is actually planted fruit punch. Nick Fury arrives and arrests the Gargoyle.

Retrieved from "https://heykidscomics.fandom.com/wiki/Marvel_Age:_Spider-Man_Team-Up_Vol_1_2?oldid=1441672"
Community content is available under CC-BY-SA unless otherwise noted.