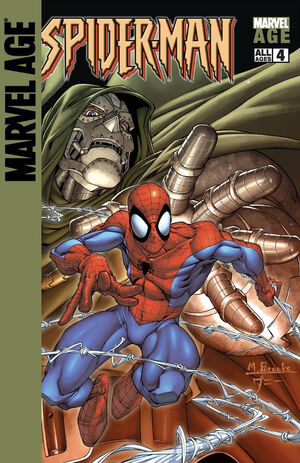 Appearing in "Marked for Destruction by Dr. Doom!"Edit

How do Spider-Man and Flash Thompson figure into Doctor Doom’s plot for world domination and revenge against Reed Richards? It’s a tale of mistaken identity, ill-advised pranks and more Doombots than you can shake a stick at as the MARVEL AGE rolls on! Plus: the Fantastic Four!

Retrieved from "https://heykidscomics.fandom.com/wiki/Marvel_Age:_Spider-Man_Vol_1_4?oldid=1441679"
Community content is available under CC-BY-SA unless otherwise noted.