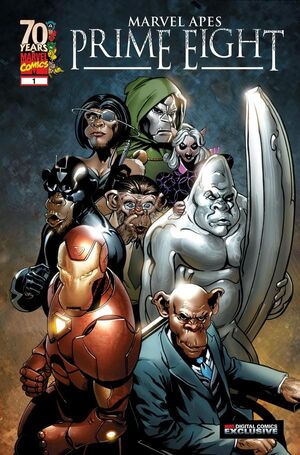 Tony Stark dreamed of himself confronting an unknown and morbid threat to his world before frightfully waking up. Seeing it as more than a dream but a warning, Tony saw in his dream are hordes of humans entering to his world. He heads to his lab in continuing rebuilding the portal in order for his primate kind to take the initiative against the human race. Tony is then called by Nick Furry, Director of S.H.I.E.L.D., who requests his assistance as the Iron Mandrill in dealing with a rampaging Hulk in downtown Monkhattan. Though Tony initially reject his help until hearing from Furry that the Hulk's rampage was due from waking up from a "bad dream".

Donning as the Iron Mandrill, he finds the Hulk, who angrily demands in finding and smashing "rotten, hairless monkeys" that he had saw in his dream. Upon seeing Iron Mandrill, Hulk knows him according to his dream and immediately wants to "smash" him. The two fight until being peacefully stop by the Silverback Surfer, who tells his arrival's purpose was the same dream that Iron Mandrill and the Hulk had, concerning a threatening force. Then the trio are met by Nicole Furry of the year 2099, who tells them that the dreams means the end of the world. Furry 2099 then tells them to follow her lead and that they must "meet the others."

Retrieved from "https://heykidscomics.fandom.com/wiki/Marvel_Apes:_Prime_Eight_Special_Vol_1_1?oldid=1441690"
Community content is available under CC-BY-SA unless otherwise noted.