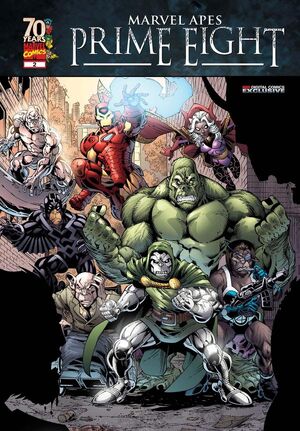 Nicole Furry took Iron Mandrill, the Hulk and the Silverback Surfer to a warehouse and meet three other individuals gathered by Furry: Black Bolt of the Inhominioids, Cleook the Simian Sorceress Supreme, and Professor Charles Exapier. Everyone, besides Furry, had their questions in which Prof. Exapier raised the question to Furry as to why they should trust her, given that she made her mind blocked from Exapier's telepathy. Furry explained to him and everyone that she made herself insure from allowing from knowing the future and disrupting the time stream, and that their gathering was according to her scientists is a divergent point in the time stream. Which they're gathered as the "Prime Eight". The group noticed that they're only made of seven, until the surprise appearance of Doctor Doom who is the last member of the group. This agitated the Hulk in which he is then transformed back into Bruce Bannaner by Cleook. The group then proceed to the main matter that their dreams are visions showing a warning that their world is going to be invaded by human zombies, who will doomed Earth and all life. Furry further explained that according to her history that the visions are originated unknown and that she must kept one of the member of the Prime Eight protected at all cost. Doctor Doom strongly suspected he is the one, which Furry confirmed this according to her people that it is likely Doom will fell and join to the zombies. The revelation disgruntled the group in which Black Bolt suggest through Exapier in killing Doom from making the future from happening; however, Furry turned that idea down and that Doom must be present in the point of divergence. Iron Mandrill is agitated in hearing this of the idea of protecting Doom in order to save their universe as ridiculous, Cleook stated that Furry is right as she has sensed a tear in reality's fabric and that it is not an invasion, but an infection. The zombies are not coming as they're already here.

Retrieved from "https://heykidscomics.fandom.com/wiki/Marvel_Apes:_Prime_Eight_Special_Vol_1_2?oldid=1441691"
Community content is available under CC-BY-SA unless otherwise noted.