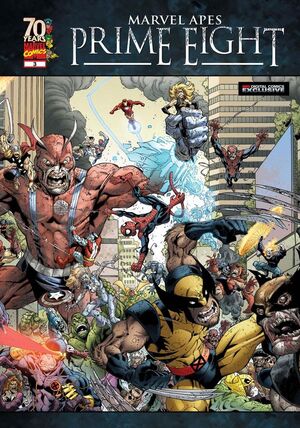 The Marvel Zombies consisting of Giant-Man, Wasp, Triton, Wolverine, Iron Man and Captain Rectitude feasts on the corpse of Marvel Chimp. Captain Rectitude panicky rants that it is wrong for them eat on the living until being killed through a repulsor ray to the head by Iron Mandrill, along with the Prime Eight. Both the Eight and the zombies attack leaving Triton split horizontally in half. Both groups are in an even match, and Doctor Doom is gang up and devour. However, this is a illusion that the zombies are eating as projected by Prof. Exapier. Given enough time for the Prime Eight to plan a quick course in ridding the zombies, the group plans in sending them back to their dimension with the help from the Silverback Surfer and the energy from the Hulk. The zombies finally see and hear through the illusion. As they are about to attack the Prime Eight, the Surfer bridge a portal to the zombies' world, creating a vortex that sucks the zombies as Cleook kept her team static from sucking in. The halved Triton latches onto Black Bolt and attempt to bite, but to be blow back by Black Bolt's voice.

After the vortex disappear, Doctor Doom stormed away. Despite sending the zombies away, Nicole Furry reveals to the others that someone among them must be infected as it happen in history, otherwise the future wouldn't happened. Just as Furry demand the group of who is bitten, they in turn points out to her thigh bears a bite mark. Furry realized why her people chose her to be sent back to the past, and then turning into a zombie. She is immediately disintegrated by Iron Mandrill. Bruce Bannaner, having turned back from exhausting his powers as the Hulk, is very confuse of this as everything doesn't make sense as Furry must exist in the future or it would've been a time paradox. However, Iron Mandrill tells Bruce that it doesn't really matter and leaves back to his home.

Five days later, Tony Stark is close to finishing the dimensional portal. Jarvis calls in asking Tony that since he has been working hard the last few days, he could arrange some dates for him. Tony is oblige and then unmasking his face, revealing that he has turned into a zombie. Having recently devouring on his dates to sustain him. He was the simian who is bitten as he was previously infected when the zombie Wasp entered into his armor before she was removed. After being bitten Tony madly realize that "kill or be killed" and "eat or be eaten" fits perfectly in his society. So, he used one of Triton's dismembered arm he had previously retrieved in using it to key a way to the zombie's universe, in bringing them to his world to feast on.

Retrieved from "https://heykidscomics.fandom.com/wiki/Marvel_Apes:_Prime_Eight_Special_Vol_1_3?oldid=1441692"
Community content is available under CC-BY-SA unless otherwise noted.