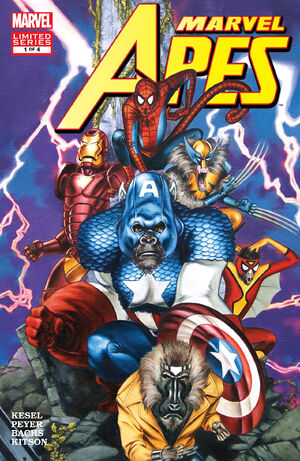 Appearing in "Apes of Wrath!"Edit

Flingin' feces, True Believer-- the entire Marvel Universe has gone APE! Just when he thinks life can't get any worse or weirder, Marty Blank – a.k.a. that lovable loser, the Gibbon -- finds himself and the brilliant-and-beautiful Dr. Fiona Fitzhugh transported to a world where monkeys rule and humans don't exist! SEE the spectacular simian city of Monkhattan! MEET the hominoid heroes and villains – SPIDER-MONKEY! DOC OOK! IRON MANDRILL! SIMIAN TORCH! THE APE-VENGERS! And more! THRILL to the return of Speedball! CONTAINS No-Ads, as we are thrilled to present you backup tales exploring the Apeiverse! LEARN the dark secret of the primate planet! WORRY that the fate of the entire universe is in the hands of the Gibbon!

Not a hoax, not a dream, not an imaginary story - just the most not-to-be-missed mini-series of the season! If you only buy one (well, two) comics this month about super-powered, intelligent apes-in-capes, it must be MARVEL APES!

Cover of X-Men #31 redrawn with the X-Simians instead of the X-Men.

Appearing in "The Official History of the Marvel Apes Universe: Part 1: When Simians Clash"Edit

Synopsis for "The Official History of the Marvel Apes Universe: Part 1: When Simians Clash"Edit

The Watcher walks the reader through the history of the Monkeyverse.

Retrieved from "https://heykidscomics.fandom.com/wiki/Marvel_Apes_Vol_1_1?oldid=1675933"
Community content is available under CC-BY-SA unless otherwise noted.